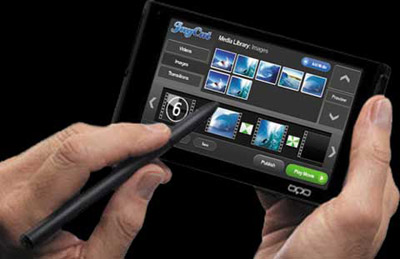 JayCut is a Web-based application that was founded in February 2007. The Stockholm-based company just launched a revamped site, with improvements and more advanced editing features.

The user interface is presented as a two-video track layout, which is a standard among professional editors like Premiere and Final Cut. As someone who honed his video-editing skills on various versions of Premiere, I immediately took to JayCut. It will feel comfortable to almost anyone who has used one of the more high-end software packages.

One of the advantages of the two-track format is that it helps you to better visualize and manipulate transitions between two shots. You put a video clip in the top track (usually referred to as "A") and a second clip in the bottom track ("B"). Between these two tracks running along the timeline, there's a row where you can insert transition settings. The final edited video plays the footage on Track A until it comes upon a transition setting put in the middle track, whereupon the video changes over to the footage of the clip running along Track B.

After I spent nearly an hour uploading my video clips to JayCut's servers, putting the footage on Tracks A and B of the timeline was a simple drag-and-drop affair. I tested JayCut on the latest versions of Firefox and Chrome, and the app operated quickly, smoothly and stably -- almost as if it were a desktop program.

JayCut comes with several transitions that can be easily clicked and dragged onto the timeline. These include the standard dissolves and wipes, and some cheesy ones (such as changing over a shot to another through an expanding heart shape). A standout is the picture-in-picture effect. With it, you can simultaneously show the footage on both Tracks A and B: One appears in a smaller size and is set over the lower-right corner of the other video.

Manipulating and improving the picture quality of your clips is also easy -- for example, you can just click and drag the brightness settings onto the timeline. Placing text over video is a cinch and is done using the mouse too. You can make the words scroll over the final footage.

Because JayCut is a Web-based application that requires you to upload your video files to its servers, you need to consider the size and format of your video files. My Canon camera produces video files in the DV AVI format, which means a typical file would be approximately 220MB for one minute of video with a resolution of 640-by-480 pixels. But if your camera records video into another, more compressed format -- MPEG4 would be a common example -- the resulting file size will be considerably smaller, since an MPEG4 file can be less than one-tenth that of its DVI AVI equivalent in 640-by-480 resolution. (I converted the footage I shot from DVI AVI to MPEG4 using Super, a free converter program.) 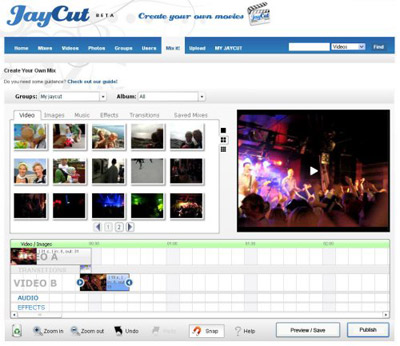 While looking professional, JayCut 2.0 is intended for very basic edits

However, the biggest problem is the way JayCut handles previews. Let's say you want to see how a transition looks going from one video clip to another. Instead of processing just this sequence (that may run for only a few seconds), JayCut insists on processing the entire video -- all the clips on the timeline. This can take a lot of time, partly because the resulting video has to be downloaded back to your Web browser and played through JayCut's playback window. (This video processing and downloading cannot be manipulated by the user separately -- both happen automatically in the background once you start a preview-rendering of your video.)

I put in several transition effects, overlaid text, trimmed the length of video clips and laid them from shot to shot. Fine-tuning these required a lot of previewing (and thus frequent processing, reprocessing, downloading and redownloading of the video file). So the more bandwidth you have (especially for uploading), the better off you'll be.

The public release of the new version of JayCut will let you save your edited video to your own computer in the WMV video file format in 640-by-480 resolution. I wasn't able to test this, since the preview version did not have this feature enabled.

Web-based JayCut looks like a desktop video editor and sports a professional looking UI, but it's only practical for editing a short video that doesn't require a lot of cuts or transitions.