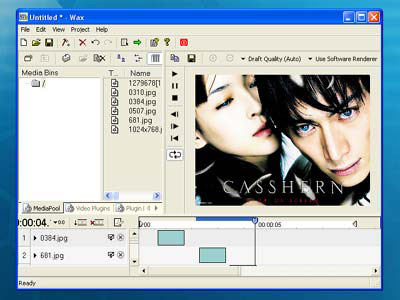 Its user interface is similar to JayCut's and looks like a professional video editor's, although navigating through the timeline can quickly become messy. That's because Wax's way of editing is ... peculiar. Like JayCut, it utilizes more than one track, but Wax allows you to use each track for only one clip. That means that if you want to edit together 20 clips, you'll need to use 20 tracks.

If you want sound (and why wouldn't you?), you might need to double that number. Every video clip you import into this program is automatically split into two parts: video and audio. So you need to use two tracks in Wax's timeline to have synchronized sound with your video.

Wax includes a lot of transitional effects. And I do mean a lot -- we're talking visuals like your video folding into the shape of a cube, spinning and unfolding into the footage of the next clip. Or morphing your image into a bouncing ball. Or into the shape of a house (yes, a house). This desktop video editor has the standard transitions as well (wipes, dissolves, fade-ins and fade-outs, etc.), but it's the wacky transitional animations that make it interesting.

One picture-quality issue vexed me: Most of the effects would "soften" the original sharpness of the video image. When I created a transition after a clip had run for six seconds, although this changeover ran for only three seconds, the image quality in both clips looked less sharp.

I tried to work around this by applying a transitional effect only to the specific points in time in the two clips where I wanted the changeover to happen. Pulling this feat off required adding even more tracks to the timeline (i.e., each of the two video clips in question required an additional copy of themselves). 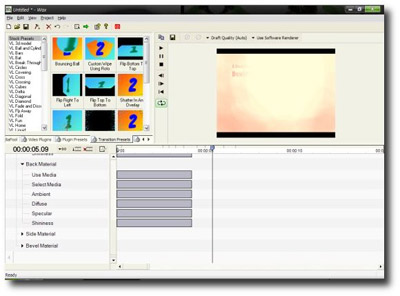 Wax 2.0e is a great tool for animation

My results were sometimes glitchy, with transitional effects animating erratically; admittedly, this could have been related to the fact that I didn't give the effect more than a few seconds to run. Some of the transitional effects ended with a quick but distracting flicker, became inexplicably "stuck" in the midst of animating or failed to work at all.

In the end, I spent several hours cutting together the third chapter of my golf-ball-whacking drama. Most of that time was spent trying to successfully apply transitional effects.

You can render your final video in Adobe's SWF, the MPEG-1 or the XviD format. I managed to get Wax to successfully create files that worked in these formats. But the extensive options for these compression formats are laid out in a very non-user-friendly manner -- as formats within the settings menus -- and will probably be bewildering if you're not already knowledgeable about the intricacies of video compression formats.

If you already use a professional video editor for Windows, Wax could be used as a separate tool for applying unique animated transitions to your video. For everybody else, it's not suitable for casual editing because of its complexity -- and how often do you want to use an effect where your video morphs into a spinning cube?