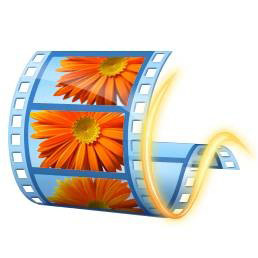 The most obvious difference between Windows Live Movie Maker and its predecessor is that, for some reason, Microsoft elected to drop the use of a timeline to arrange the order of your video clips. The older version has a user interface resembling that of a professional video editor -- a timeline runs along the bottom, with a playback window previewing your footage on the right.

Window Live Movie Maker goes another direction. Instead of using a timeline, it arranges your clips on the right side of the screen as a series of thumbnails, and the playback window is set to the left. The playing order of your clips runs from left to right, and from top to bottom. You can rearrange the sequence of your clips by dragging and dropping their thumbnails.

To edit a clip (i.e., set its start and end points), you double-click on its thumbnail, and the appropriate editing functions under the Edit tab in the toolbar that runs along the top of the interface will be automatically selected by the program so that you know which you can use. (You can also split apart a selected clip, which will create two separate thumbnails.)

Windows Live Movie Maker has effects to improve or alter the image quality of your footage, such as filters that convert your clip into various shades of black and white. There are even some motion effects, including those that make your video throb in a wavy manner as if it were a 1960s psychedelic film.

You're instantly shown in the playback window what these effects will look like. This preview isn't a static image but full-motion video running for a few seconds, which is extremely convenient. Effects are applied to a video clip by clicking on its thumbnail and choosing the Visual Effects tab on the toolbar at the top of the user interface.

A changeover animated effect from one clip to another is applied just as easily. Click on the video clip you want to transition to, and pick your desired transition (diagonal, dissolve, wipe, etc.) from the Animations tab on the toolbar. Windows Live Movie Maker will automatically join the two clips together with the transition. 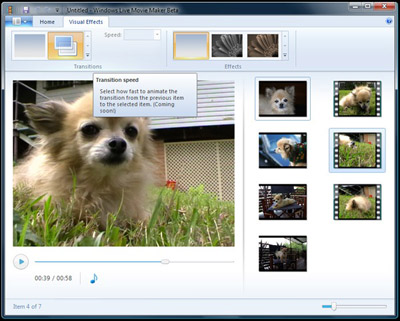 To add text to your video, you use the text-applying tool to place a bar below your sequence of video clip thumbnails. Then, in the playback window, you type in and edit your text. Effects for your text (such as scrolling or fading in) can be selected from the Text Tools tab, and you're immediately shown a preview of your text in action.

Your completed video can be saved only in Microsoft's WMV format, in sizes ranging from 320-by-240 resolution to the largest high-definition format of 1920 by 720. The neatest feature is that Windows Live Movie Maker lets you output directly to YouTube: Enter your username and password, and your finished video will be uploaded to that site. This is how I uploaded Part 4 of my friends' golf-ball-whacking day to YouTube, and the process went smoothly.

To be honest, I miss the timeline from the original Windows Movie Maker. But if you can get used to this (which might be easier if you don't already have a preference for editing video on a timeline), then this editor's strength lies in its easy-to-apply effects, transitions and text. The ability to upload directly to your YouTube account is another plus.

The ideal free video editor for Windows would be a conglomeration of the ones featured in this roundup: the user interface (the timeline and two-video track layout) of JayCut, the image-enhancing tools of Avidemux, the varied selection of transitional and animated effects of Wax, and the instant previewing of video effects of Windows Live Movie Maker.

Editing video can be more of a challenge than shooting footage, but this challenge should be on the creative side -- not with the editor itself.

Howard Wen is a frequent contributor to Computerworld.