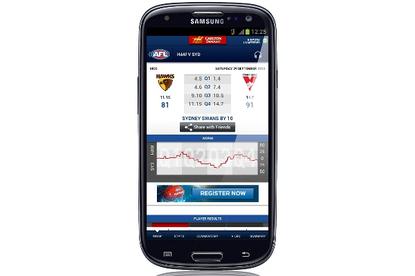 Australian Football League (AFL) fans can stay in touch with the footy action on their smartphone or tablet with the release of an AFL Live Official app.

While the app has been developed by Telstra, it is available to Optus and Vodafone customers. It can be downloaded from the Apple App Store and Google Play marketplaces.

NRL fans to get live match streaming on mobile, tablets from 2013

AFL fans also have the option of a monthly subscription for $14.99 or a season pass for $89.99. This will give them access to a live video stream of every 2013 Toyota AFL Premiership season, finals and 2013 NAB Cup games.

Telstra Media executive director J-B Rousselot said the introduction of a carrier agnostic app was due to customer feedback.

In addition, customers also have access to Wi-Fi capability and multi device porting of subscriptions for the first time.

“We listened to our customers and found these are the two features that fans have wanted the most,” he said.