Tibco 6.0 moves outside the data center

Tibco ActiveMatrix BusinessWorks 6.0 can expose back-end applications for mobile clients outside the firewall 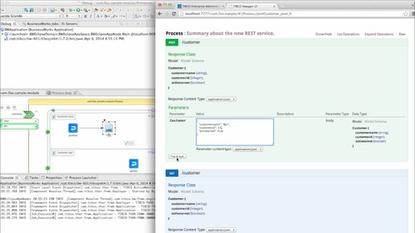 Updating its platform for the hyper-connected cloud era, Tibco has equipped the new version of its flagship application-integration software with the ability to communicate with external applications.

"What we've seen in the past year is a shift in what organizations need to integrate," said Thomas Been, Tibco senior director of product marketing. "The new frontier of data integration is happening outside of the data center."

The updated software now offers the ability to expose internal data services for external applications through APIs (application programming interfaces) that use REST (Representational State Transfer) calls. Using this feature, organizations can build mobile applications for customers or employees who work outside the firewall, for instance.

Also on the developer side, programmers can now insert Java components into any Tibco connection.

The components could handle tasks such as additional security checks, aggregating different sources of information, or reformatting data to meet quality standards. Adding such components into the Tibco middleware layer could be less work-intensive than adding that logic to the application or the client, Been said.

Components can also be updated on the fly, and can be shared among multiple developers.

The redesigned user interface comes with a set of patterns that can speed up the process of building routine connections. Developers now can see the data sources that their processes are accessing and exposing. A connection can be executed directly from the developer interface, saving time in testing.

This is also the first version of BusinessWorks to include a copy of Tibco's ActiveMatrix data grid, which maintains active messaging processes in the working memory of the server, ensuring fast response times to data requests. It could help mobile applications draw information more quickly from back-end data sources, for instance.

Tibco does not reveal the prices of its products prior to talking with potential customers. Pricing is based on the number of processors running the software.

The company has also released a slimmed-down version of ActiveMatrix BusinessWorks Express, aimed at smaller organizations and projects. Express was designed to compete, price-wise, with open-source, subscription-based products covering similar functionality, such as Red Hat JBoss Data Virtualization. Pricing for this edition is based on the number of back-end systems being connected.

Founded in 1997, Tibco provides software for sharing data across otherwise incompatible enterprise software systems. It has also used its base data integration platform to offer additional analysis, complex event processing and other capabilities. It has over 4,000 enterprise customers, including Delta Air Lines, Rent-A-Center, Citibank, the Union Pacific railroad and BAE Systems.