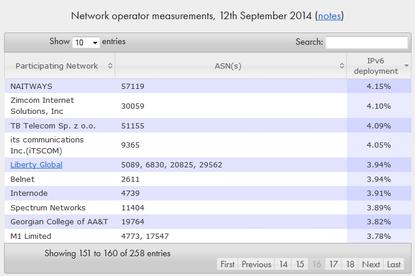 Australian ISPs continue to make a poor showing on IPv6 adoption, based on data released this week by World IPv6 Launch.

IPv6 provides about 340 undecillion IP addresses, compared to the 4 billion addresses supported by IPv4. As the number of Internet-connected devices has grown, exhaustion of IPv4 addresses has necessitated the adoption of IPv6.

Even so, global adoption of IPv6 remains small, at about 4.5 per cent.

World IPv6 Launch, the group that put on World IPv6 Days in 2011 and 2012, has continued to measure IPv6 deployment rates by network operators across the globe. Its latest measurements were taken earlier this month on 12 September.

Australia’s big three telcos – Telstra, Optus and Vodafone – have yet to make a showing on the charts.

The only three Australian network operators listed are Internode, Monash University and the Australian Academic and Research Network (AARNet).

The world leader in IPv6 deployment is NYSERNet, a non-profit ISP in the US state of New York, with 97.3 per cent. Further down the list, Google Fiber reported 77.6 per cent IPv6 deployment and Cisco has 38.5 per cent.

In a recent interview at the APNIC 38 conference earlier this month, APNIC chief scientist Geoff Huston said that Australia needs to do better.

The full IPv6 report can be read on the World IPv6 Launch website.