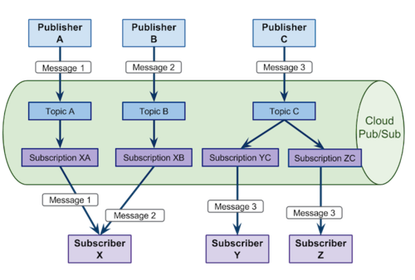 Closing a gap with other enterprise cloud providers, Google has created a service to facilitate communications across applications that customers build on the company's cloud platform.

The Google Cloud Pub/Sub service, made available as an open beta on Wednesday, is designed for exchanging messages across different Google cloud services and internal systems in great volume and with minimal delay.

The base service allows applications to dispatch missives to each other at a rate of up 10,000 per second. Google promises that the messages will arrive at their destinations in less than a second, even when customer systems are generating more than a million messages per second.

The Pub/Sub service can connect different components built on the Google App Engine and Google Compute Engine, as well as to outside applications by way of a secure Web connection.

With the Pub/Sub release, Google is catching up with other cloud providers. Amazon Web Services offers the Simple Queue Service. Microsoft offers the Azure Service Bus.

The service could be used in multiple ways, according to Google product manager Rohit Khare, who posted a blog entry about the new release Wednesday.

A human resources application could rely on the service to trade information among multiple components, such as a company directory and a payroll system.

Pub/Sub, accessible via an application programming interface (API), could be used to coordinate traffic on an Internet of Things-styled sensor network, routing all the information from the end-nodes to a data analysis application.

Google unveiled the service at its I/O developer conference last May, but testing was limited to a few customers. It's now available for all to try as a beta service. An early tester, social networking service Snapchat, uses Pub/Sub for its Discover search feature.

Google will not charge for Pub/Sub during the beta period. The company has not announced when the service will be ready for full production use.