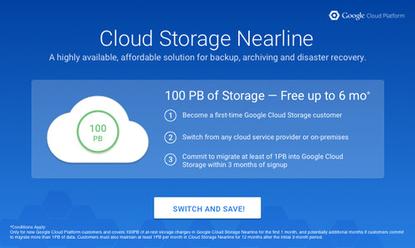 Google's "switch and save" program for Cloud Storage Nearline.

Google had its sights fixed firmly on Amazon Thursday as it launched its new, low-cost Nearline cloud storage service out of beta and into general availability.

Originally introduced to much fanfare in March, Cloud Storage Nearline now promises 99 percent uptime, on-demand I/O, lifecycle management and a broadly expanded partner ecosystem. Aiming to further sweeten the deal for companies currently using other providers, Google is now offering the service with 100 free petabytes of storage -- equivalent to 100 million gigabytes -- for new users for up to six months.

Google's standard pricing is one cent per GB per month, so the credit is essentially worth $1 million for each month it lasts.

Also free for a limited time is the service's new on-demand I/O feature, which is designed to give organizations a way to increase I/O in situations where they need to retrieve data faster than Nearline's provisioned read rate of 4 MB per second throughput per terabyte of data stored. For the first three months after launch, on-demand I/O will be offered at no additional charge.

Taking aim directly at Amazon, Google has even created a total cost of ownership (TCO) calculator to estimate how much can be saved using Google's cloud storage rather than Amazon Web Services.