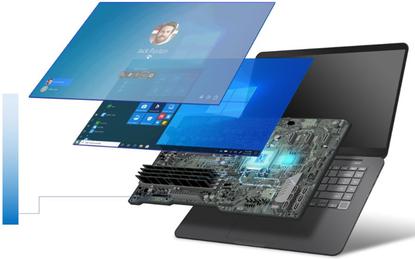 Considering the products on the initial list of Secured-core PCs, it’s fair to say this initiative will be aimed at business users. For instance, Microsoft’s Surface Pro X is listed, but not the Surface Laptop 3.

Other PCs on the roster include the Dell Latitude 7400 2-in-1, the Lenovo ThinkPad X1 Carbon, and a handful of others. AMD, Intel and Qualcomm all support the initiative.

While there are software defences in your PC to protect against attacks like ransomware, a firmware attack dives deeper, corrupting and/or attacking the fundamental code that governs the intersection of your PC and its hardware. If the firmware is compromised, the operating system may not even be able to tell, eliminating secure-boot capabilities and other protections.

Microsoft’s blog post goes into greater detail, but essentially what a Secured-core PC does is boot the system using the existing firmware, then re-initialise it into a trusted state.

This prevents any virtualisation capabilities from being compromised before they begin. It also allows admins to monitor that the device booted securely.