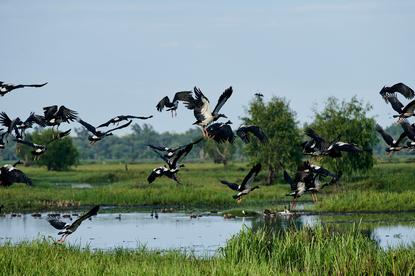 An Australian-led project dubbed 'Healthy Country' aims to identify the best way to preserve and protect national parks with a focus on combining the knowledge of traditional owners and cloud-based AI.

However, para grass, originally introduced as fodder crop, has turned into an aggressive and fast-growing weed and has been displacing native plants. Para grass has reduced the habitat of animals including magpie geese, ducks and turtles.

The focus was on Indigenous knowledge indicators for healthy country regarding weeds, fire, and feral animals and building on work already underway to manage Kakadu’s riparian zones, which include its rivers and floodplains.

The area selected to begin the trial was the Kakadu wetlands, where the project focused on identifying the best ways to control and then eliminate the para grass weed and consequently attract some local species back to the region.

Specifically, the magpie geese are an important food source and key indicator of the environmental health of the area. To simply spray the weed is not as easy as it sounds, CSIRO research scientist Justin Perry explains.

"It's a really difficult place to control this weed, because it's in the middle of a floodplain that's full of crocodiles. So it's a very dangerous place to go out and do weed spraying," Perry said.

He also explained that for some time, because of the size and difficult access and the fact that the para grass can be one to two metres high, the area has been left aside.

After being synchronised to Azure, the data is analysed with CustomVisionAI to identify plants and animals. The data is then made available through PowerBI to rangers who can access it on a mobile device and make instant decisions.

Indigenous knowledge was given a high priority during the project. CSIRO principal research scientist Cathy Robinson says Indigenous knowledge has been used appropriately to guide management decisions, and "weave together science, including AI... to deliver healthy country outcomes".

The Microsoft involvement is part of its $50 million AI growth global program.

"We brought together our products and technology and some of our data engineers. The team that we have on the ground brought them together with the teams from CSIRO and others to figure out how to solve this problem," Microsoft Australia national technology officer Lee Hickin said.

After 12 months the area of the park that was 100 per cent covered by para grass has now been almost halved and from an initial recorded five magpie geese there are 2000 back in the wetland.

Feach Moyle, Kakadu National Park, country and culture manager, Parks Australia, believes the project will pave the way for future groups to come together in support of the protection of Indigenous lands.

“This project has strengthened the ties between traditional knowledge, science and technology to solve complex environmental problems in an ethically responsible way," Moyle said.

“With so much of our environment under the protection of Indigenous communities, we now have another way forward that can assist those responsible for the care of these lands to make decisions that will ultimately deliver healthy country outcomes.”

The final step is to put the open source framework into Microsoft's GitHub which enables Microsoft to share that technology globally.

"By putting it in GitHub, what we really hope is that the great work that CSIRO and others are doing here can be amplified and shared globally to other indigenous communities, to other scientific research communities, to other governments, and parks and land management organisations around the world," Hickin said. "So that scaling out is super important to make sure that we're having the most impact that we can have."