Is your netbook envious of touch-driven devices? You can't turn your netbook into an iPad, but you can retrofit it with a touchscreen and avoid the tiny touchpad.

WARNING: Only skilled or daring hardware hackers should attempt this process. Voiding the warranty is the least of your concerns; you'll have to solder parts together, cut away some of the laptop's plastic housing, and otherwise make permanent changes that you can't undo. Make the wrong move, and you'll break the laptop. We are not responsible for anything that goes wrong with your PC as a result of your following our instructions.

If you know your way around a soldering iron and are willing to strip your netbook down to its last screws, however, you'll likely succeed at this project. It's a straightforward process, even though it's too daunting for beginners. 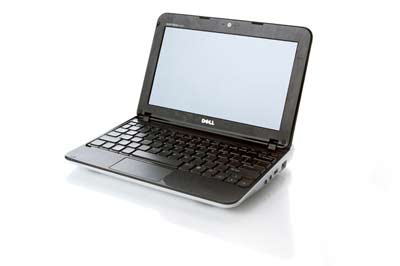 I installed a touchscreen into a Dell Mini 10. Follow my steps if you have that exact netbook, or read through to get a sense for how to approach your own model. The general process will be the same, and I include many tips that I picked up along the way. Read through to the end before getting started.

First, line up all the parts and tools you'll need to install a touchscreen.

Of course, the touchscreen panel itself is the centerpiece. This clear overlay sits on top of your current LCD. Usually it's sold in a kit with a USB controller board. I couldn't locate any shops that keep these in stock, so I turned to eBay and a Hong Kong importer.

Pick a touchscreen panel that matches the size and aspect ratio of your screen. I bought a 10.1-inch model that fits the Mini but was designed for an Acer Aspire One, for US$90. These panels are usually resistive--that is, responding to pressure--not the capacitive type, which recognizes your skin. Single-touch panels are also more common; get a capacitive, multitouch panel if you can find one, but prepare to pay more.

You'll also need a reliable soldering station. I have the Weller WES51. I can set its temperature to make it hot enough to melt solder without sending excessive heat to the connected parts.

Get a small tip or two for your soldering iron. I have 1/32-inch and 1/64-inch tips. You'll make small joints and surface-mount connections that require a fine point. Also, use some fine solder, with about a 0.02-inch diameter. You'll need to add your own flux, as well; I just brush some on from a jar, but pick whatever kind you like.

You might need some low-gauge wires to extend the touchscreen cabling. If you have a spare USB cable, cut that open to harvest its wires.

If you have the motor control and eyes of a 14-year-old, you might be able to work without magnification. Otherwise, I recommend a lighted, magnifying arm. Buy one from an electronics-parts store such as Jameco, or even from Amazon.

Also, you'll need a Dremel or similar tool to shave plastic from one of the speakers and to lop off a leg under the wrist rest.

Finally, gather the basics: a pair of scissors or a wire stripper, electrical tape, a Phillips screwdriver, and other common tools. Grab a handful of guitar picks to help crack open the case, and tweezers to make fine movements. Also keep a days-of-the-week pillbox or two to store screws in separate compartments. Put the screws from each step in their own compartment, and write down where you stored them as you progress.

Clear off a well-lit workspace, and you can begin the dissection. First, unplug the laptop and remove the battery. Turn the machine upside down on a padded surface to avoid scratches; a big mouse pad works well. Remove the four screws on the corners surrounding the battery cavity. 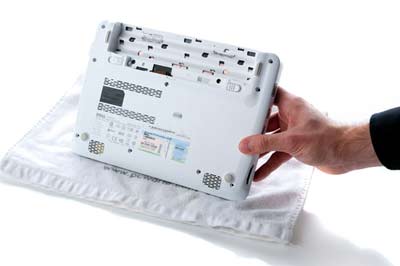 With that battery slot on the edge away from you, remove the four screws along the edge closest to you. Each set of those screws straddles one of the two rubber footpads.

Remove the screw in the center of the laptop. If this screw doesn't fall out, you can push it out after removing the keyboard in the next step. 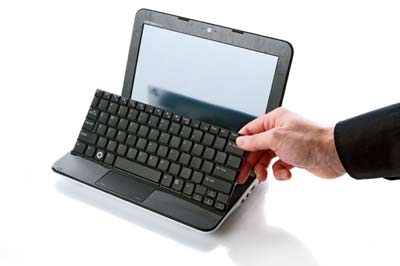 Turn the laptop right side up, and open the screen. Lift the keyboard out from the top edge, along the F-keys. Pivot it over the spacebar edge to access the ribbon cable underneath. Use your fingernails, tweezers, or the dull side of a hobby knife to slide back the tabs next to the ribbon cable; once you've moved those, the cable will be released. Set the keyboard aside.