I first tried to desolder one of the USB ports, remove it, and connect the new cable with simple through-hole soldering. However, not only was I not able to free the USB port, but I also ended up damaging the board in my attempt. 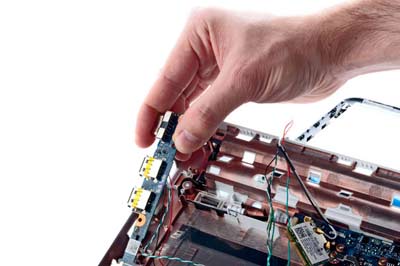 Instead, I recommend surface-mount soldering to the back of that board. It's not as elegant, but it's simpler and should work just as well. Since my touchscreen kit included cables for an Acer PC, I cut one of them about three-fourths along its length. I then soldered the longer piece to the board.

Spread some flux on the target pins; you're aiming for the four positioned directly behind the USB plug. With the board upside down and the plug facing away from you, solder the pins from left to right with the respective colors: red, white, green, and black. Connect the wires to the rightmost USB port, the one near the VGA port. 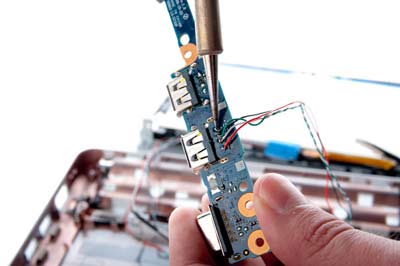 Strip just enough of the wire ends to expose them before soldering. Heat up the wire with the soldering iron, and melt a little solder directly onto the iron. This is normally bad form, but you're going to hold the wire directly on its target and carry the solder over. It should flow to the wire and board.

This process should just take a few seconds per pin. I prefer to hold the wire with tweezers to keep my fingers away from the heat.

Let the wires cool for a minute, and then turn the board over. Cut the four pins on the soldered USB port, severing them as close to the board as possible.

Solder an additional segment of cable to the short set of wires, extending the attached plug's reach. The finished length should be about the same as the other wires soldered to the netbook's USB port.

With the same surface-mount soldering technique--flux first, then carry over the solder--connect the four wires. With the USB port facing away from you, from left to right the colors should be black, green, white, and red. Avoid shorting out those cables between one another or bridging back to the circuit board. 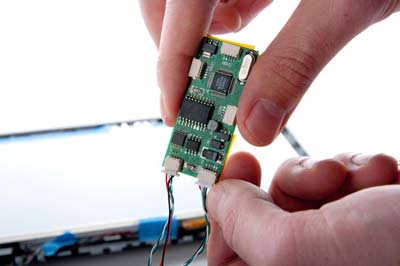 Reattach the USB board, including its screw and two cables. Reattach the long gray part directly above.

Now you're going to attach the touchscreen. Since any dust or fingerprints between the LCD and touchscreen will stay forever, I recommend wearing nonpowdered latex or vinyl gloves. At the very least, use screen cleaner on the LCD before continuing.

Remove the covering from the touchscreen part, and attach it so that it evenly surrounds the LCD. Position the ribbon cable on the right side. (Your specific screen part might vary.) Affix it with a thin, sparing layer of single- or double-sided tape. Gently bend the ribbon cable over, creating a 90-degree angle, leading to the lower-left corner of the display. Tape it loosely in place.

Connect the ribbon cable to the socket extender. Tape that loosely in place, running to the left corner of the screen. Connect it to the Touch port on the controller card.

Reattach the hinge and LCD screen to the base of the computer using the three screws. Route the cables through the hinges as they were originally wired, keeping them in the open end to avoid pinching. Reattach the right cables, including the grounding loop inside the screw. 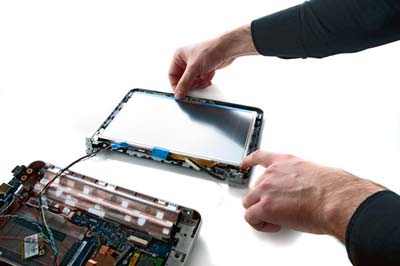 Clear Space for the Controller

The touchscreen controller card doesn't take much space, but jamming it into the tight case is tough. I almost fit it underneath everything, but it slightly bowed the motherboard; tighten the screws too much, and I would have cracked something. Instead, I made room by cutting away the right speaker and a plastic tab above.

Grab the big plastic part that contains the touchpad, and use a Dremel or other tool to cut the tab on the back of the right side of the wrist rest. (When working with the part, you'll turn it over, so it'll be on the left.) Cut off as much as you can, but you don't need to obsess.

Cut the right speaker wire halfway between the speaker and the plug, and solder a 3-inch wire extension to one of the sides. Unscrew the speaker. Before you take the speaker all the way out, you'll notice that the speaker part favors the left side of its black, plastic enclosure. You're going to cut the right side away.

Working with a Dremel or other cutting tool on a medium speed, carefully start by cutting plastic back on the long, corner edge farthest away from the speaker part. Make a careful incision to affect just the top of the plastic, and pry it up.

You'll now see the metal speaker inside and the internal wire positions. Cut away as much of the plastic next to the speaker part as possible, including one of the screw mounts. Avoid the wires.