Of all the software on your PC, the Web browser may be the most important tool you use each day--but you may not give it much thought. The difference between a merely good browser and a great one, however, can be vast. The best browsers are those that stay out of your way: When you're in the right browser, you feel as though you're alone with your favorite site. The browser loads pages quickly, without crashing, and it can deftly handle any Web page you visit without prompting you to do anything extra.

But there's more to a browser than just that. To satisfy power users, it must support a multitude of add-ons and extensions. It must be customizable. And to protect you online, it should do a good job of catching and blocking potential security threats--such as phishing or cross-site scripting attacks--and be resistant to malware.

We put the top five browsers—Internet Explorer, Firefox, Chrome, Safari, and Opera--through an exhaustive set of lab-based tests and subjective examinations to see exactly how they stack up in terms of interface, security, extras, and speed.

For a summary of the browsers' features, see the chart here. For more on what we found, read on.

Browser interfaces all follow the same basic formula. Within those constraints, though, browsers exhibit some notable differences.

First off, you can tell quite a bit about a company's approach to product development just by its browser interfaces. Apple's Safari has a fair amount of fit and finish, for example. Google's Chrome is spartan and unadorned, and Mozilla's Firefox interface is usable but feels dated compared with newer competitors.

Slim is in. Most browsers now sport more-streamlined looks, with fewer, narrower toolbars--and in many cases on Windows, no menu bar to speak of. This sort of layout typically works well, since it usually includes a couple of drop-down menus in the toolbar that give you easy access to the browser's features.

Firefox, Chrome, and Opera all let you apply different skins to the toolbars. Generally I find it pretty simple to locate and change skins in each of these browsers. Google, for instance, has an online repository that lets you browse and apply themes for Chrome. Mozilla has a similar site for Firefox. One nifty part of Firefox's skins feature--called Personas--is that you can "try on" any of the skins simply by mousing over the thumbnails on the Personas site. In Opera, meanwhile, you browse themes from within a control pane in the app itself; that works okay, but the pane isn't quite as easy to browse as the Chrome and Firefox skins galleries are.

We based our evaluation here on the ease of use, polish, flexibility, and layout of each browser's interface. We also looked at whether the interface got in the user's way too much, or whether it allowed Websites to take center stage.

The leading browser on the market, Internet Explorer, sports a decent interface in version 8, but it feels cluttered when compared with newer browsers on the market. Two features pertaining to its tabbed-browsing function are useful, however. First, IE 8 groups related tabs together using color coding. If you open a link from PCWorld.com in a new tab, for example, it will open adjacent to the original tab, and the tabs themselves will have a matching color. You can move tabs from one group to another; but if you have, say, three unrelated pages open, you can't create a group out of them.

Second, IE 8 provides a tab thumbnail view: Click the thumbnail button (the one with four squares on it) in the tab bar, and up pops a screen with thumbnails of your open tabs' contents. It's a good way to see all your open tabs at once; whether it's better than Opera's mouse-over thumbnails is up for debate, though.

Bearing the same basic look and feel as earlier versions of Firefox, version 3.6 seems dated next to other modern browsers. It has more "window chrome" (a window's toolbars, menus, title bar, and so on) than what the latest versions of Chrome or Safari have, which makes it seem like something out of 2006, not 2010. In addition, its highly cross-platform nature means that it can feel a little out of place at times, even on Windows.

But there's nothing seriously wrong with Firefox's interface, and it has its share of niceties. For one thing, its Find bar makes searching for a specific word or phrase on any given page easy. And though Firefox isn't the only browser to have a URL-autofill feature, it does the job better than most other browsers do.

One note: Shortly before we finished this roundup, Mozilla released a beta of Firefox 4. Among Firefox 4's new features is a revamped user interface that takes cues from competitors like Chrome and Opera. Check back for our ongoing coverage of Firefox 4 as it nears its final release.

With Chrome, Google applied its trademark minimalist style to its browser. The main Chrome window has only the basics (a tab bar, an address field, back/forward/reload buttons, and a couple of drop-down menu buttons), which lets the page you're browsing become the star of the show. You won't find a status bar, either; page-loading messages appear as needed in the bottom of the window. The overall result is a browser that's slick, speedy, and responsive.

Chrome's tabbed browsing is presented in a thoughtful manner. The tabs are located above everything else on the page, which makes for a logical flow of information in the window. As you open up more pages, the tabs shrink to fit the avalable space; and as you close tabs, they grow again.

Safari delivers all the standard options, but throws in a bit of Apple flair. For example, the address bar doubles as the page-loading progress bar. The default homepage displays thumbnails of your most commonly visited sites against a glossy black background. The bookmarks manager is laid out well and lets you view thumbnails of bookmarked pages as you click through them. 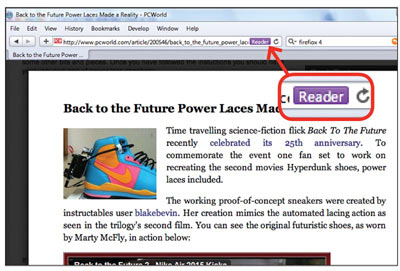 New to Safari 5 is one of my favorite features in any browser: Safari Reader. When you read an article on a site in Safari 5, you can click the small Reader button in the address bar, and up slides an overlay that displays only the article's text. The feature has caused controversy in certain circles--some site operators believe that it hurts ad sales--but it makes reading an article far easier. On the other hand, Safari does foist a number of Mac interface conventions onto Windows users, so it may not be for everybody.

All of Opera's menu items are glommed together under a single, small drop-down menu button--and that button disappears entirely if you hide the tab bar, in which case you have to press the Alt key to pull it up. I've got to hand it to the folks at Opera for trying something different, but the result is perhaps a little too minimalist. 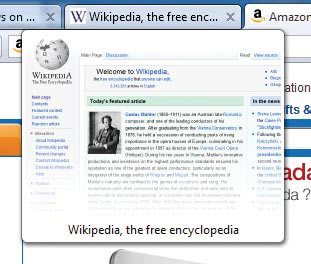 In part because of this minimalist aesthetic, Opera's interface is clean, polished, and attractive. The interface is also plenty flexible, with a healthy number of toolbars for you to choose from. Some of the toolbars, such as the favorites bar (Opera calls it the Personal Bar), take up more screen space than I would like. Opera also gives you the option of displaying page thumbnails in the tab bar; it's a great way to distinguish one tab from another, and it's one of my favorite features of the browser.

Chrome comes out ahead thanks to its clean, functional interface, but we also liked the polish of Opera and Safari. Which interface is "best" can be subjective, so this is largely a matter of personal preference.