We didn't have the proper nVidia-based cards on hand in time in time to compare them with AMD's new cards, but we should still be able to get a good idea of the relative performance. We performed all of our benchmark testing on a system equipped with an Intel Core i7 980X CPU and 6GB of RAM running 64-bit Windows 7.

Let's start with the Unigine Heaven benchmark, a synthetic test of a real DirectX 11 game engine, currently licensed by a number of smaller games. The test is rather strenuous and forward-looking, featuring high detail levels, dynamic lighting and shadows, and lots of tessellation. (Tessellation is a DirectX 11 feature that involves breaking up blocky, low-polygon 3D models into smooth, high-polygon models.) We ran the test at the middle "Normal" mode. Apparently, the high clock speeds and improved tessellation engine are paying off, because the sub-$200 Radeon HD 6850 beat the $279 Radeon HD 5850 at all resolutions, and the 6870 did even better. 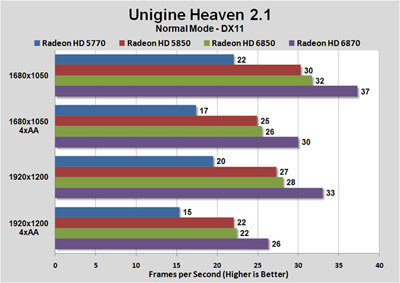 FurMark is a synthetic OpenGL-based test that renders a torus (a geometric shape that resembles a doughnut) covered in fur. It's rather simple, but no test we're aware of stresses out a GPU more thoroughly. It's a great way to see just how hot your graphics card will get, and how much power it will use. The 6850 was dramatically faster than the 5770 here, and surprisingly, it even matched the 5850 when antialiasing was enabled. The new 6870 managed slightly faster performance than the 5850, even though it costs about $40 less. 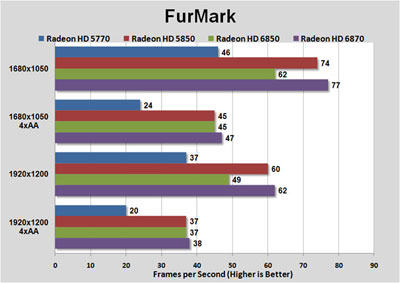 Though it's getting a little long in the tooth, 3DMark Vantage is a standard still commonly used in synthetic graphics benchmarks. The engine uses DirectX 10 only, though a new version of 3DMark geared for DirectX 11 should be coming soon. We present the 3DMark scores with standard settings for the "High" and "Extreme" profiles. While the 6850 ran about 30 percent faster than the 5770, it couldn't catch up to the 5850. No matter; the 6870, which is less expensive than the 5850, beat it handily. 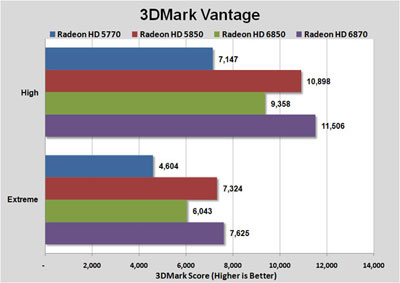