These days, if a desktop-focussed Linux distribution wants to stand out from the pack of Ubuntu-wannabes it either needs to be especially slick or offer something a little bit different to the norm. Peppermint Ice falls into the latter category: It's a Debian-derived (via Ubuntu), lightweight Linux distro that's designed for netbooks and has a strong focus on Web applications.

Peppermint Ice's main claim to fame is its use of a 'site-specific browser' (SSB), dubbed Ice, which is based on Google's Chromium browser. Peppermint One, a fraternal distro from the same developers, uses Mozilla's Prism (a project that, according Mozilla Labs' projects page, is now not being actively developed). An SSB is a stripped-down browser that lets Web-based applications and services be treated in a somewhat similar fashion to a standard application: instead of navigating to a site using your browser, you can simply click on an icon on your desktop/applications menu/taskbar and an independent browser session is launched for that application (with none of the usual toolbars and menus you find in a normal browser session).

For example, instead of the usual Openoffice.org or KOffice, in Peppermint Ice's taskbar menu you will find links to Google Docs, Google Reader, Google Calendar and Google Mail (as well as the lightweight, non-Web-based ePDFViewer). Similarly, instead of the GIMP, the Graphics submenu contains a shortcut for Pixlr.com's online image editor. Clicking on one of the links will 'launch' the app: opening a new instance of Chromium dedicated to that particular Web app. The advantage of using an SSB, instead of a standard browser with multiple tabs or windows, is stability: a browser crash means you won't bring down every Web app that you're using.

Installation was as simple as you'd expect for a modern Linux distribution. After inserting a USB thumb drive with Peppermint Ice installed on it using UNetbootin our trusty Lenovo S10 netbook swiftly booted up the OS (the Peppermint-Ice-10012010.iso file was used for this review). Installing Peppermint Ice on the S10's hard drive was then a matter of minutes. Shutting down the system takes a handful of seconds, while going from power-on to the log-in screen took about 30 seconds; log-in itself took less than five seconds. The times are excellent, and a reflection of the pared-down nature of this distribution. 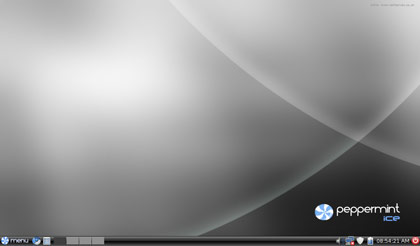 The Peppermint Ice desktop is pretty standard: four virtual desktops, a taskbar and a menu for launching apps. The desktop system is provided LXDE ("Lightweight X11 Desktop Environment"), which uses the Openbox window manager by default.

Even on a netbook, everything felt reasonably snappy. Default 'Ice' shortcuts include, along with the aforementioned Google services and Pixlr, Dropbox, YouTube, Facebook, Seesmic Web, The Cloud Player and last.fm. Naturally, you can install a range of normal Linux applications easily enough using apt-get, the Synaptec Package Manager or mintInstall. Ice itself is a simple program that lets you create new SSB shortcuts quickly.

Peppermint Ice is certainly an interesting Linux distribution, and we really appreciate just how lightweight it is. It's a much more pleasant experience than using Windows XP on most netbooks. The SSB concept is not a million miles from what Google has attempted with its Chrome OS, and it suffers from one of the same key flaws: By its nature, it requires almost constant connectivity, which just can't be guaranteed when you're away from your office's Wi-Fi network. Part of the appeal of smartphone and tablet apps is that you can use many of them even when you can't connect to your telco's network.

However, it's undeniable that there are many popular Web-delivered applications — Google Docs and Gmail — that people use for their work on a daily basis. If nothing else, Peppermint Ice is an easy to use, delightfully lightweight OS for a netbook, and not having a browser crash wipe out the rest of your work — anyone who spends most of their days buried in a Web-based CMS will know just how much pain this can cause — is great.