Under a draft industry code of practice unveiled today by telco group Communications Alliance, ISP customers will be issued with a series of warning notices in response to alleged online copyright infringement.

The implementation of such a code is one of the key pillars of the government's crackdown on online copyright violations.

Under the code if a rights holder detects unauthorised online sharing of one of its works, it can notify the ISP associated with the IP address.

The initial notice will inform the recipient "that the activity allegedly detected on their account is indicative of an infringement of copyright under the Copyright Act 1968 and provide information about sources of non-infringing content.

If an account holder receives three notices within the space of 12 months, "ISPs will, on the request of a Rights Holder, facilitate an expedited preliminary discovery process" — clearing the path for a rights holder to take civil court action against the alleged downloader.

Previously a major barrier to the development of a notice scheme has been the apportioning of costs for establishing and operating it.

Section 4.4 of the draft notes that rights holders and ISPs are still working to "quantify the costs of meeting the specific operational responsibilities and processes required by the Scheme" and "determine how these costs should be fairly apportioned between ISPs and Right Holders" in line with a letter sent last year to stakeholders by Communications Minister Malcolm Turnbull and Attorney-General George Brandis.

That letter said that the government expected the code to "fairly" apportion costs between ISPs and rights holders and ensure smaller ISPs are not disproportionally affected.

The draft code also provides a means for ISP customers to appeal to an 'Adjudication Panel' if they are issued with three notices within a 12-month period.

The scheme also envisages capping the number of notices ISPs will have to issue during the first 18 months after implementation: "No ISP will be obliged to process more than a [minimum specified number] of Infringement Reports during a given calendar month during the initial 18 months of operation of the copyright notice scheme."

An evaluation process will be carried out within 18 months of the scheme coming into effect.

The three tiers of notices are categorised as "education", "warning" and "final". After issuing a final notice an ISP is obliged to "act reasonably to facilitate and assist an application by a Rights Holders for Preliminary Discovery":

An ISP must comply with a final court order to disclose the Account Holder’s details to the Rights Holder. 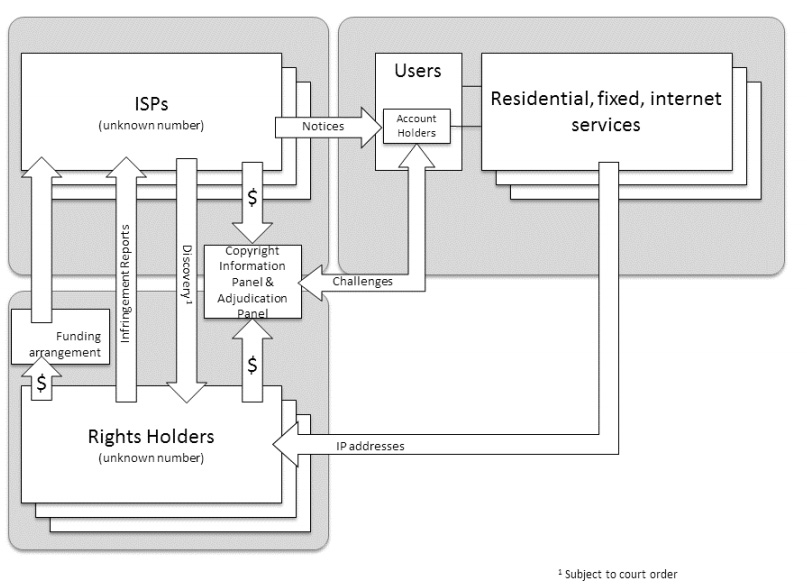 "These issues are complex and while both industries want to eradicate online copyright infringement, it has proved very difficult in the past for rights holders and ISPs to agree on the shape of a notice scheme," Communication Alliance CEO John Stanton said that in a statement released by the organisatoin.

"Much work remains, but publication of a draft code is an important milestone toward greater protection for the legitimate rights of the creative industries."

Advocacy group Australian Communications Consumer Action Network (ACCAN), which participated in the drafting process, said it was concerned about the potential for rights holders to use evidence gathered through the scheme to take court action that would disconnect consumers.

"Disconnection from the internet or speed throttling are not proportionate methods to tackle the problem of online copyright infringement," ACCAN's CEO, Teresa Corbin, said in a statement.

"Negotiations are still underway on key aspects of the code and ACCAN will continue to engage to get a fair result for consumers.

"Evidence from overseas strongly indicates that markets that have access to affordable legitimate content do not have the same problem with online copyright infringement. For example in the US the relative volume of torrenting reduced five-fold after Netflix and others gained a foothold

"We believe that if the Australian streaming market is allowed to mature it would reduce the need for costly regulation."

Corbin said that ACCAN is concerned that consumers will ultimately pay for the scheme.

"This scheme sets up a David versus Goliath struggle, letting corporate giants such as Foxtel and Village Roadshow Limited use their legal force against everyday Australians," Choice campaigns manager Erin Turner said in a statement.

"While the industry is trying to sell this as a no-penalty education scheme, it will actually help them funnel Australians into litigation by forcing ISPs hand over customer details based on unproven accusations.

"This is no gentle education program. It's a flawed notice scheme that gives rights holders access to personal details. ISPs will send up to three notices based on rights holder accusations. After this, they can pass on personal customer details to the rights holders."

The group also criticised a $25 fee charged to ISP customers who wish to appeal a notice.

Turner said the scheme could lead to so-called speculative invoicing or expensive lawsuits for consumers.

"This scheme will likely see Australians being either sued or contacted by rights holders demanding arbitrary payments," Turner said.

"This is particularly concerning because under Australian law, there is no limit to the amount of money that can be sought by a rights holder for copyright infringement."

The effectiveness of "graduated response" schemes reducing copyright infringement has previously been questioned by Australian research.

"Graduated response schemes have been variously criticized for impinging on the human right to freedom of expression, for breaching privacy and for failing to comply with key tenets of the rule of law," states a 2013 paper by Monash University researcher Rebecca Giblin.

"But quite separate from those criticisms, their legitimacy is seriously thrown into question by the startling lack of evidence that graduated response helps achieve any of copyright law’s underlying aims...

Another key pillar of the government's copyright crackdown is proposed legislation that will allow allow rights holders to apply for court orders to force ISPs to block websites.

The government is yet to introduce a bill to implement a copyright-related site-blocking regime. The idea has previously been condemned by critics as "open to abuse" and "unlikely to be effective".

The scheme "will enable a court to order the blocking of overseas hosted websites that can be shown to be primarily for the purpose of facilitating online copyright infringement," the letter by Turnbull and Brandis stated.

A number of ISPs including iiNet are currently engaged in a legal struggle with US company Dallas Buyers Club LLC over an attempt by DBC to obtain the details of ISP customers who allegedly violated its copyright. The impending introduction of an industry code that includes an expedited preliminary discovery process has been raised in court.