Network World started its Wider Net stories in 2003 in an effort to lighten up our news pages, acknowledging that there is a lot more to the world of enterprise networking and IT other than speeds and feeds of switches and routers and WAN links.

The story approach was modeled somewhat after the Wall Street Journal's famed and quirky front page A-Hed articles (i.e., the middle column), but tended more to networking topics, from "When animals attack…networks" to the story of networking's most famous couple, Alice and Bob of security lesson fame.

While Network World did away with its formal weekly Wider Net articles when the publication switched over to publishing twice a month, we've tried to continue mixing in lighthearted pieces through our blogs and in other places on our website and print magazine. Here are some of our favorites:

Whirling through the world of propeller beanies

If your memory is fuzzy, that was the time of the last big propeller beanie craze, most notably in Baltimore, where the multicolored hats morphed from being geek chic to a must-have item for the city's youths. In one incident that grabbed national headlines, police arrested a 10-year-old boy for holding up a 9-year-old at gunpoint to relieve him of his rainbow-hued hat.

Selling bunker mentality to IT shops

KIMBALL, Neb. - Don and Charlene Zwonitzer know a thing or two about preparing for the unexpected.

The knowledge comes from reclaiming a 1960s-era Atlas E Missile Silo and converting it into home sweet home - and eventually, they hope, a modern-day computer disaster-recovery facility.

Home for the Zwonitzers is 20 feet underground in the panhandle of Nebraska, where arriving visitors disappear into the middle of nowhere before finding themselves in front of the couple's 47-ton steel "garage" door, where the military once backed in its 82-foot-long Atlas missile.

On the company dime: Rogue game server admins tell all

Back in January, Scandinavian gamers hijacked a New Hampshire medical center's server to host "Call of Duty: Black Ops" sessions. When asked about that incident, Stephen Heaslip of the gamer site Blues News told Network World that hackers are not the most likely individuals to commandeer corporate servers for illicit gaming: Such appropriations are more often the work of IT administrators, he said. When asked if he could put us in touch with some of these rogue game server admins, Heaslip posted a call to his readership -- and four volunteers stepped forward.

We'll call them Mr. North, who is director of network operations for a midsize manufacturing company; Mr. South, an IT administrator in the poultry business; Mr. East, a university systems admin when he was active in this realm; and, Mr. West, a senior systems admin in the medical industry. Here's what they had to say:

Results of a high-tech research project to be released next week promise to finally unravel much of the remaining mystery of a 2,000-year-old astronomical calculator (update).

Since its discovery in 1902, the Antikythera Mechanism -- with its intricate and baffling system of about 30 geared wheels -- has been an enigma. Our knowledge of its functions has increased as computer-based imaging, analysis and X-ray technologies have evolved. During the last 50 years, researchers have identified various astronomical and calendar functions, including gears that mimic the movement of the sun and moon. 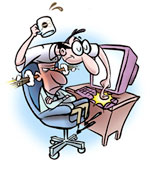 What users hate about IT pros

Really, would it kill you to spend an extra 30 seconds with a user to make sure the fix you just applied actually works?

That's what Jeff, portfolio manager with a financial services firm in the Washington, D.C., area, wants to know.

"[It irks me] when an IT manager 'fixes' something on my computer and then says 'It should work now' and walks away," says Jeff, who, like other users interviewed, didn't want his last name or company named for fear the IT pros in his organization read this publication.

CCIE: Talk about a stress test

Anthony Sequeira knows a little about stress. The 35-year-old network instructor from Tampa, Fla., once purposely stalled a single-engine plane and sent it into a tailspin five times in a row as part of his efforts to earn his pilot's license. He's also a world-class poker player. But nothing in his thrill-seeking exploits prepared him for the pressure of taking the Cisco Certified Internetworking Expert (CCIE) lab exam. The CCIE exam is "absolutely more stressful than doing loop-de-loops in a plane," Sequeira says.

"With piloting, you conquer fear by eliminating the unknowns. The fear of the unknown is what you consistently face in the CCIE. They could throw a topic at you that you have no experience with. They did it to me all five times that I took the exam." Sequeira passed the lab exam in January, joining the ranks of 12,967 network engineers who have aced the grueling hands-on test.

Exposing sensitive personal information means always having to say you’re sorry. Some people do it better than others, however.

Here are 10 examples of data breaches and the resulting apologies issued by companies, universities, and one government agency. After each apology, the team from the Web site Perfect Apology weighs in with a detailed evaluation and ranking on a scale of 1 to 10. Read through the list to find out who scored a -3 on the Perfect Apology scale.

If everyone started watching "24" or "CSI" on video iPods or streamed over the Internet - instead of on TV in their living rooms - these top-rated shows would probably go the way of "Cop Rock."

That is, Jack Bauer would become the victim of, not terrorists, but bad ratings. This is because Nielsen Media Research cannot collect data about what people watch on handheld video-viewing gadgets or from PCs streaming network TV shows. While Nielsen estimates around 90% of TV viewing still happens in homes, it's this burgeoning 10% that TV networks and advertisers are desperate to delve into.

Spyware used to worm its way into PCs when users tried to download a free utility, such as a screen saver, and wound up with an unexpected bonus after agreeing to the distributor's license agreement.

Today most spyware infiltrations follow a different course: Users browsing the Web unknowingly launch "drive-by" downloads as they peruse sites affiliated with spyware makers. What those spyware-dumping sites often have in common is pornographic content.

During his law enforcement days Harry Megerian got his hands on a lot of IT gear - by brute force.

"We probably did a raid once a week or once every two weeks," says Megerian, a former computer forensics specialist with the U.S. Treasury Department. "I would walk away with five computers, on average."

These days Megerian still scours computers for evidence, but he does it on a consultative basis through the firm he founded, Computer Investigative Services, in Rochester Hills, Mich. One thing he doesn't miss is the raids. "I got a little tired of running up flights of stairs, breaking in doors," says Megerian, who retired from the Treasury Department in 2003 after 29 years.

What's in a code name?

A shark fin, that is.

"There's an informal network of who you can get the fin from," says John Power, the marketing manager for the Enterprise Storage Server, who explains that the shark fin is a reference to the product's code name, Shark. "There are closets in IBM offices all over the world with these fins in them," Power says.

As the techie crow flies

When you first see the management team's background - past leaders from companies such as thin-client pioneer Citrix and VoIP vendor NetSpeak - you might think: "Here we go again, another network start-up."

But in this case, you'd be flying off course. DayJet, the brainchild of Citrix co-founder Ed Iacobucci, is a tech company at heart, but its focus is on simplifying air travel for business executives in areas under-served by major airlines.

Every year thousands of cell phones, PDAs and music players meet their demise in toilet water. But lest it seem the toilet is merely a destroyer of technology, consider the growing number of high-end toilets sporting remote controls, wireless sensors and built-in accessories such as music players and lighting.

Many of these advanced receptacles come from Japan, where manufacturers Inax, Matsushita Electric Industrial and Toto are based. There, residents have embraced the high-tech toilet for more than a decade. Designs are driven by different factors; luxury models include docks for sound cards and wireless remotes, for instance, while health-oriented designs add sensors for urinalysis and speech-activated commands.

Getting the presidential cell of approval

Driving around the nation's capital, it's impossible to miss the extensive preparations underway for President Bush's inauguration, which will be held at noon on Thursday in Washington, D.C.

A massive wooden platform has been erected on the front terrace of the U.S. Capitol for the swearing-in ceremony. Bleachers perch on the sidewalks along the 2-mile parade route. Barricades, temporary fences and police have blanketed the area between the White House and Capitol Hill.

Scattered across the National Mall and nearby streets are white vans and trailers topped by 40-foot poles, antennas and microwave dishes. These mobile cellular towers are loaded with racks of radios and other gear needed to support the needs of the 750,000 people expected to attend the inauguration.

When Ken Fobes walks in the door of his mansion in Ponte Vedra, Fla., he taps a touchscreen on the wall of the foyer and instantly the house is lighted and his favorite music plays softly inside and on the patio. With another tap, Fobes can adjust the temperature in his swimming pool or turn on his waterfall.

The high-tech features scattered throughout Fobes' home - which is dubbed Le Maison De L'eau - are controlled through four touchscreens connected to a 100M bit/sec Ethernet network that snakes throughout this 5,000-square-foot home.

When Google recently removed BMW.de from its database for using unfair Web design techniques, a collective cheer rose from the ranks of other designers around the globe. Instead of indicating an impending crackdown on tricks aimed at manipulating search engine results, however, the incident served to spotlight disagreements over what constitutes abuse.

It also led experts to reach a conclusion that some Webmasters might find unsettling, namely that Google isn't and maybe cannot be the police of the Web.