GroupWise includes a new home view that gives users a portal-like interface into a selection of applications and Web 2.0 tools. 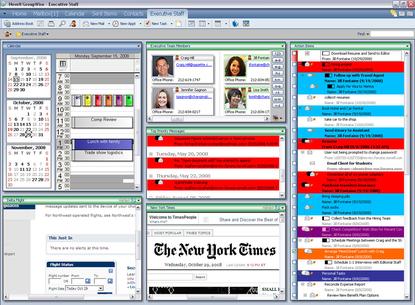 The upgrades to GroupWise include a new home view that gives users a portal-like interface into a selection of applications and Web 2.0 tools.

Novell has worked this year to make over its GroupWise platform, which for years has been the perennial third-place collaborative platform behind IBM and Microsoft.

The purchase came after a partnership between Novell and SiteScape had produced in October 2007 Novell Teaming + Conferencing, which is based on SiteScape's ICEcore collaboration tools. Those tools form a Web-based team workspace and real-time conferencing platform that includes Web 2.0 and social-networking technologies.

With GroupWise 8, Novell is polishing its core collaboration platform for the future.

"The product has been pretty full feature for some time, but it didn't look as fresh for people who are use to looking at Web applications and consumer-based tools," says Mark Levitt, an analyst with IDC.

New is a feature called home view that gives users a dashboard for easy access to applications and Web 2.0 tools, such as blogs, feeds and wikis. Users can personalize their dashboards, have multiple dashboards, and can build them to become the client interface for a specific group of users or a business department.

GroupWise 8 also has support for a number of handheld devices including iPhone, BlackBerry and Palm.

On the administrative side, Novell has added the capability for IT to publish all the e-mail addresses for a particular user into the directory in order to more accurately track each user. Also new are auditing features that support additional information such as client type, version and amount of disk space used.

The new features help IT administrators make licensing, account and storage decisions, according to Wendy Steinle, director of marketing for Novelluser computing solutions.