Free tools for teleconferencing with a 'virtual presence'

As business travel costs have gone up, there are now free choices that do more than mere instant messaging or video chatting 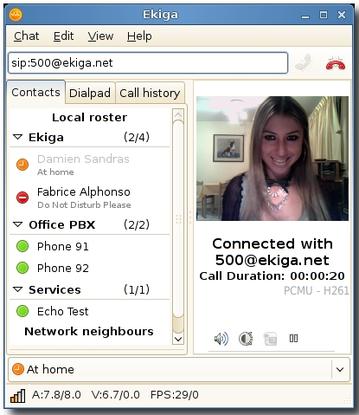 Using teleconferencing technology has lately become an obvious and financially practical choice to offset rising business travel expenses. Yet sometimes simple chatting doesn't cut it. There has been growing interest in the notion of online conferencing with a "virtual presence" emphasis, which enables people to share information and their very selves with one another with a stronger sense of near-tangible "face time."

"Telepresence makes possible experiences that would generally require travel," says Claire Schooley, an analyst at Forrester Research who tracks the evolving teleconferencing market with an emphasis on virtual presence technologies. "To share drawings, pieces of art, even swatches of fabric, would require travel, which people might not be willing to do -- either they are too busy or sometimes too important. Interviews, law depositions and medical exams are other situations that require excellent quality [high-definition] at least."

"Telepresence refers to large plasma screens with cameras, microphones, lighting, along with a well-placed conference table and chairs," she says.

Such a setup can run up into six figures in price. Less technologically advanced units featuring HD-quality video, from providers such as Cisco and HP, cost less but can still be too much for small business, especially if one doesn't plan to use them regularly. It's not much of a bargain after all if the intent is to save money on travel expenses.

With this in mind, we took a look at a trio of software alternatives. Of course, none of them can replace the full-on teleconferencing products with big screens showing life-size images , set in a meeting room with nice furnishings. But each does specialize in an area addressed by the expensive virtual presence technologies -- and, even better, they're free.

The recently released Version 3 of Ekiga has been heavily tested with IP private branch exchanges (PBX) implemented using Asterisk, Cisco Call Manager and many other Session Initiation Protocol (SIP)-based applications that an office may already have.

"Some people see Ekiga as a simple chat application or as a Skype replacement," says Damien Sandras, the creator of Ekiga. "That is only partly true. From the beginning, we wanted to give Ekiga an enterprise-worthy dimension. That is one of the reasons why we added features like call transfer, call hold and call forwarding. Those features are probably not useful for common people, but they are more than useful when using Ekiga as a softphone in companies."

Ekiga supports industry standard video codecs, including H.263 and H.264. Being connected through a VPN to a videoconferencing unit at the office will allow you to attend meetings with good quality video while using little bandwidth from anywhere in the world.

One satisfied Ekiga user is Guillermo V. Salas, who works for a company that has many offices throughout Ecuador. From these locations, he uses Ekiga on his notebook to participate in high-resolution, full-screen video teleconferences with co-workers located at the main office.

Salas says "Ekiga is very useful and simplifies busy schedules for people who do not have the time, or do not like to travel a lot. The quality of video is clear and is like being with the other people in the same room."

Ekiga can be set up quickly. If your office is equipped with a SIP IP PBX, you only have to ask your admin for the log-in and PIN in order to connect to that IPBX.

Once you are connected, in a few clicks you can add the phone numbers of your colleagues in the contact list to monitor them, place calls, receive calls, transfer them, forward them and consult the Lightweight Directory Access Protocol directory of the company to look for colleague or customer phone numbers -- all over IP.

Third-party contributor-developers have since extended it to support higher-quality video and shared whiteboards, adding functionality to make it suitable for enterprise use. Anyone is free to extend the features of Access Grid in any way they see fit. "This openness is a huge differentiator in the space in which the Access Grid plays, because it is a largely closed, proprietary playing field," says Tom Uram, technical lead of the Access Grid project.

One strength of the Access Grid is the notion of persistent meeting rooms, or Virtual Venues. Users can enter a Venue for group meetings and share documents and applications. Individual members can enter the Venue at their leisure, or go back at any time to retrieve project documents from an earlier meeting. A virtual working environment like this can build cohesion among the telecommuting members of a group . "I regularly have Access Grid meetings with groups all over the world, and there's a very real sense of shared purpose that arises from our shared experience," Uram says.

Upon running the Access Grid Venue Client, you will join a default Lobby, where you will find other users and see their video feeds. Businesses may want to set up their own Venue Server, which is included with the installation software. This will allow them to run an Access Grid server on their own network and configure Venues for their individual projects.

This open-source version of the Second Life server can be integrated with corporate back-end systems. The developers of the project have designed the OpenSim code with a modular design to make this as easy as possible.

"I won't pretend that it isn't early days for OpenSim. The code is considered to be in an alpha state," says Justin Clark-Casey, a core developer of OpenSim. "However, already some projects, such as the IBM 3D Datacenter , are using it successfully in customer engagements

"I think the idea of presence is very interesting," says Clark-Casey. "Actually being in a 3-D environment as opposed to swapping e-mail messages or chatting gives one a much greater sense of participation in something. The brain is seeing and interacting with colleagues in a way which is much closer to real life, even more so than seeing someone's face on a webcam."

"In fact, I feel that collaborating with colleagues in actually producing something, as opposed to going to meetings, is going to be one of the major uses of virtual worlds," Clark-Casey says. "It's pretty primitive at the moment, but the technology will get better over time."

The school's own mixed-reality collaboration spaces can be completely run within OpenSim, demonstrating the current level of maturity of the software.

The OpenSim software comes in two versions: stand-alone and grid. Stand-alone packages everything into a single program and is good for running small-scale worlds. It can handle about 10 to 15 user avatars. If more heavyweight use is required for more users, grid is better -- it splits up various features into multiple programs.