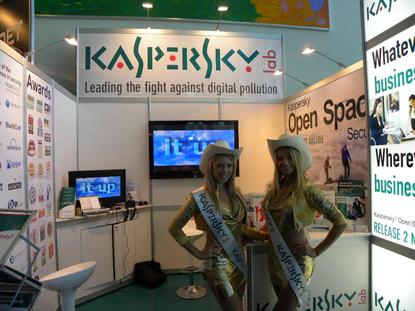 The Kaspersky Meter Maids after a Wardrobe change.

I stopped in my tracks as I ran, fashionably late, to the opening AusCERT 2010 keynote by encryption oracle Whitfield Diffie. I wasn't struck by the fusillade of coloured lights on the vendor floor, nor did I stop to gawk at Alphawest's giant inflatable basketball. It was the pair of 18-something year-old Meter Maids that seem to have got lost while frolicking the streets of Queensland's Gold Coast and found themselves as Kaspersky's booth babes.

Those readers not familiar with a Meter Maid attire should picture a bikini forged from gold aluminium, with matching heels and hair. And there's not much of it.

This, coupled with the line of roughly 40-year-old delegates waiting to have their photo taken with the girls (though they may have been Kaspersky fan-club members), led some people to complain. They felt, says AusCert staff, that a couple of girls wearing not much did not belong in a professional business conference.

I agree. I'm red-blooded and no prude, but there was something off about that.

So AusCert organiser Martin Lack sent the girls home for a wardrobe-change after a squabble with their boss (their outfits, though in violation of policy, were pre-approved), and they returned the following day - sporting an extra half inch of lacy gossamer modesty.

I'm told there were further similar squabbles on day two, and that the girls were "relieved" when another two Meter Maids were brought in to share the burden of attention.

Booth babes are a staple of IT conferences, and latex abounds when CeBit hits Hannover. But there is a professional demarcation between gadget tradeshows and enterprise IT conferences that was breached by Kaspersky. That transgression raised the ire of some delegates, and a few vendors too.

Other vendors had booth babes, but they sported skirts, jeans or jackets.

Who knows, perhaps those maids will preach good IT security to the public as they feed parking metres throughout the city.

But more seriously, drawing customers with little more than skimpy outfits is low-brow, and sexist. As a few of us joked in the press room (adjacent the toilet), it wouldn't have been such a hit with delegates if an oiled muscle-bound man solicited anti-virus protection.

The faux pas didn't seem to be lost on boss Eugene Kaspersky, either. He had allowed a laugh on arriving during his lightning visit, after one Metre Maid handed him a brochure - about himself.

Is this skirt too skimpy? Have your say below.