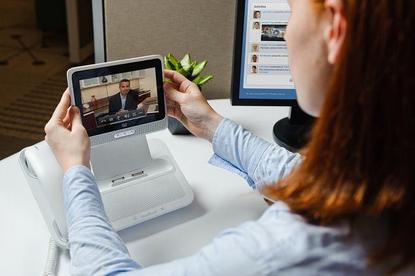 The imminent arrival of Samsung's Android-powered Galaxy slate, which may debut as early as next month, signals that interesting times are ahead for video-chat users. Businesses and other early-adopters hoping to conduct face-to-face meetings via smartphones and tablets may be in store for a frustrating experience.

A baffling array of mobile devices, many equipped with front-facing cameras and video-chat software, are arriving now or will be soon. In addition to the aforementioned Samsung tablet, iPhone 4 and HTC EVO 4G, there's the Cisco Cius business tablet, the tepidly received Dell Streak, and a host of other Android-based slates. There's a good chance that Apple will bring a camera and FaceTime to the next-gen iPod touch and iPad too.

While tech-savvy users can certainly manage to set up and conduct a video conference, the process involves a certain degree of planning and preparation. It's nowhere as easy as making a standard voice call, a shortcoming that likely won't improve in the near future.

With the arrival of 4G wireless broadband, and the growing availability of Wi-Fi in businesses and public locations, the infrastructure required for video chat is quickly becoming a reality. It may not be here today, of course, but the network plumbing will soon be in place. What's missing is a dead-simple video calling application that works across all devices and mobile operating systems.

FaceTime may work well on iPhone 4 units connected to Wi-Fi networks, but Apple's approach is both proprietary and limited. And while Steve Jobs would like to make FaceTime an industry standard, it's questionable whether powerful competitors such as Google, Microsoft, and Cisco would agree to that.

What about Skype? The popular VoIP app could very well become a de facto standard for mobile video conferencing, but wireless carriers and phone manufacturers may prevent that from happening. According to Network World, Skype is concerned that Apple and Android phone makers may cripple Skype on their platforms. Example: If a wireless carrier views Skype as a competitive threat, it might force its customers to use its own VoIP app instead.

The industry-wide implementation of an International Telecommunications Union (ITU) video-conferencing standard may eventually resolve these issues, but who knows when that'll happen. Indeed, today's video-chatters will find things a bit more challenging than they'd like.