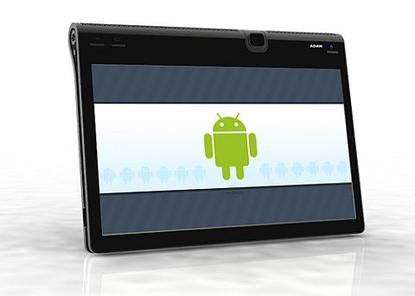 While the latest version of the Android operating system runs on Samsung's Galaxy Tab, it isn't configured to run on tablets in general, according to Google's director of mobile products.

"The way Android Market works is it's not going to be available on devices that don't allow applications to run correctly," Berra explained to TechRadar. "If you want Android Market on that platform, the apps just won't run. [Froyo, the latest version of the Android operating system] is just not designed for that form factor."

Google and Verizon are reportedly teaming up to create an Android-based tablet that will be specifically tailored for Verizon's network. Presumably, the Google-Verizon tablet will have a new version of Android if and when it is finally released.

TechRadar speculates that Berra's comments mean that Google will have such a tablet-based mobile operating system up and ready to go in the near future.

Google added several key enterprise features to the Froyo edition of its Android platform in June. Among other things, Froyo gives administrators the ability to enforce password policies across Android devices and to remotely wipe any Android devices that become lost or compromised. The latest version of the platform also supports Exchange Calendars and auto-discovery to make it easier for users to set up and sync Exchange accounts.

These enterprise upgrades give Android-based phones and tablets the bare minimum that most analysts recommend for letting a device link to the corporate network. This doesn't mean, however, that IT departments should let down their guard on Android devices overall, since the Android application market does not filter out applications posted for sale. This means that there are significant dangers for users who don't carefully watch what permissions they grant applications they download onto their devices.