The secret history of Android

From Hollywood to smartphones, the Android domain name and surrounding company as a web of mysteries 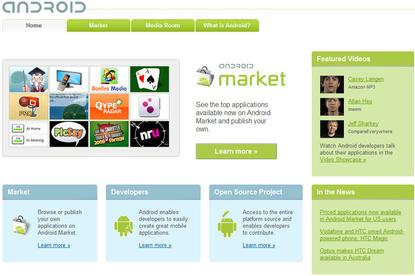 The Internet, as we all know, never forgets. And it turns out the World Wide Web has some pretty interesting memories on the subject of Android.

These days, Android.com is a polished and professional home page for Google's mobile platform. But beneath that elegant exterior lies a treasure trove of fascinating information. No shocking secrets are revealed, mind you -- we won't be unearthing any Disney-starlet-style scandals here today -- but we will be getting a rare behind-the-scenes glimpse at the history of the Android and the evolution of its famous domain.

Credit for the screenshots goes to the fine folks at the Internet Archive Wayback Machine. And credit for the concept belongs to Android Power reader Luis Levy, who came up with the idea to dig around the cached copies of Android.com. I duly tip my hat in his direction.

So strap on your seatbelts and fire up the nearest Flux Capacitor: As a certain wise time traveler once said, where we're going, we don't need roads.

Though the domain itself has existed since mid-'97, the first archived records of Android.com are from March of 2000. At that point, the domain was in the possession of a reseller called GreatDomains.com. The company wanted to sell the name for upwards of $75,000 (yikes!).

Fast-forward to June of 2002. Someone apparently bought or otherwise acquired the Android.com domain and set up a cryptic placeholder page of sorts.

Yep -- that's all she wrote. Mysterious enough for you?

By September of '02, a film and television development company called Android Creative had set up a site at Android.com. According to its page, the company -- which also refers to itself simply as "ANDROID," stylized in all caps -- worked to "create small and medium budget content that possesse[d] big budget appeal."

Just three short months later, in December of 2002, Android.com transformed again. This time, the site featured a sparse design with a man's silhouette and the phrase "a digital construction company."

By the following July, the owner had expanded the site to include links to what appear to be Web design samples (though it's hard to say for sure). The new Android.com site offered an apology for its ongoing construction -- construction that, at least in this incarnation, was never completed.

Finally, in April of 2004, Andy Rubin -- head honcho of the Android we know and love today -- showed up on the site. Rubin started using the Android.com domain as a personal Web page of sorts, featuring links to various projects, photos, and other items of interest.

At this time, it's worth noting, Rubin's "work" link pointed to the website for Danger -- the Sidekick-developing company he co-founded and remained at through part of 2004.

That May, Rubin ditched the personal page for a cryptic image of a metallic man with the top of his head exposed. The only text on the page said "Android.com" and provided an email address for contact.

An updated version of the page appeared in June; this time, if you clicked the head, you'd get a curious cartoon about unproductive ants.

Those crawly little fellows do love their lounging.

Next up: April of 2005. Four months before Google would acquire Android -- Rubin's then-small startup -- Android.com changed briefly to a series of simple Google Maps. One showed Seattle, one showed Boston, and one showed Palo Alto.

That play button at the bottom-right? It was an embedded MP3 (via Flash, naturally) of "All Robots Report to the Dance Floor." In case you aren't up on your obscure mid-90s industrial rock, that's an instrumental song by a group called Servotron -- a "science fiction-influenced band," according to Wikipedia, that was active from 1995 to 1999.

The broken link next to the video appears to have been a logo of some sort.

In December '05, four months after Android's acquisition by Google, Rubin's Android.com domain shifted back to his personal page design. This time, however, the link for "work" led to a page filled with business cards showcasing Rubin's work history (and a few jokes as well -- look closely at the Apple cards). At the top of the page sat a large enigmatic question mark; clicking it would take you to bajobs.com, a job search site.

Interestingly, the business card page wasn't actually part of Android.com. Instead, it lived at a domain called robot.net. The same applied to the home page link labeled "me"; it led to a photo at robot.net of Rubin standing on the beach and using a phone. The HTML code of the page held another subtle joke: The title attribute of the image was set as "nerd."

In April of 2008, Android.com started redirecting users to the site of the Open Handset Alliance. That October -- the month the first Android phone launched -- a new standalone site emerged. It showed the Android logo and lettering we all know today, along with introductions to the new operating system and what it could do.

The following February, a more robust site came online, showing off popular applications and offering a more in-depth look at the platform's features and capabilities.

So what ever became of robot.net? The last archived version of the site was captured in May of 2008. It shows Rubin's personal page -- more or less the same one that existed at Android.com in the 2004-2005 era.

These days, the robot.net domain is no longer active. Registry records, however, indicate the name is still owned by Rubin -- and registered all the way through 2020.

A big thanks to Luis Levy for the tip on this story. Check out Luis's personal blog for his take on all things tech: straypixels.tumblr.com

JR Raphael writes about smartphones and other tasty technology. You can find him on Facebook, on Twitter, or at eSarcasm, his geek-humor getaway.