How the Samsung Galaxy Note fares as a mini-tablet

The smartphone's large, high-resolution display invites users to think of it as a petite tablet, but it doesn't quite achieve that status. 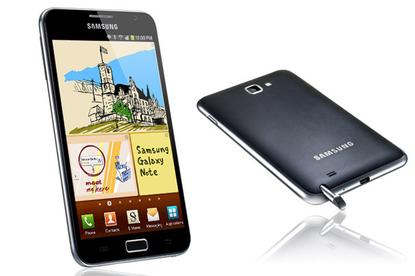 Samsung's own advertising poses the question of whether the new Galaxy Note is a phone or tablet. And punlike portmanteaus like "phablet" aside, the question is surprisingly pertinent. I've long regarded the 5-inch class display as a potential alternative to the larger 7-inch and 10-inch tablets that have been soaking up all of the attention of tablet makers, but Dell's Streak 5--a previous attempt at a 5-inch phone/mini-tablet--failed to wow. The Galaxy Note, on the other hand, impresses in many ways, though its usability is clearly hampered by the lack of a truly tablet-optimized operating system, and by its indifferent display.

PCWorld's Galaxy Note review by my colleague Ginny Mies covers many of the smartphone's merits--including its appealing stylus-like S Pen--in detail. Meanwhile, I tried to use the Galaxy Note in place of a tablet, to see how satisfactory the experience was. Ultimately, I came away with a mixed impression.

As a handheld device, with a 5.3-inch display, the Galaxy Note can be unobtrusive and discreet, yet highly functional. Its light weight and balanced form makes it convenient for holding in one hand while reading ebooks on the high-resolution 1280-by-800-pixel display.

Unfortunately, the display proved to be as much a weakness as a strength. In the native browser, Web pages display better as "mobile" pages than as full-fledged website pages. And content creation feels much more constrained on a 5.3-inch display than on a 10.1-inch screen: You can't get a lot of page onto the screen while writing a document in Polaris Office, for example. Some Galaxy Note features--such as enhanced VPN connectivity and hardware encryption--seem especially well-suited for business use. In general, when road warriors use of the Note tablet-style, they'll probably focus on email and in-a-pinch document manipulation.

My assessment of the Galaxy Note comes after having spent countless hours with competing 7-inch and 10-inch Android tablets, the vast majority of which run Google's Android 3.0 (Honeycomb) tablet-optimized OS. The Galaxy Note's operational frustrations seem endemic to Android 2.2 (Froyo) and 2.3 (Gingerbread) tablets, such as the original Galaxy Tab: Shortcomings include relatively poorly implemented multitasking, cumbersome navigation, and an annoying Web browser. (Samsung's custom TouchWiz overlay improves on a few of Gingerbread's weaknesses.) In contrast, despite their own imperfections, Android 3.0 and 4.0 (Ice Cream Sandwich) feel elegant and well-executed on tablets' larger displays.

But the Galaxy Note is not one of those larger displays. And its smaller display size affects not just its overall usability and navigation, but the user's experience with apps, too.

The Android Market appeared a bit confused with regard to the Galaxy Note; though it offered no option for downloading "tablet" apps, I could see Honeycomb tablet-optimized versions of apps in searches, and I even downloaded a few of them successfully--or sort of successfully, anyway. PressReader for Honeycomb downloaded, but it crashed when I opened it; and the News Republic for Tablet downloaded, but then suggested when I opened it that I download a more suitable version for my "tablet"--before referring me to the smartphone version of the app in the Android Market. The News Republic app worked, sort of, but it couldn't resize properly for Galaxy Note's 5.3-inch display.

So even though labeling the Galaxy Note as a "mini-tablet" is tempting, the device simply isn't yet ready for that status. To what extent this state of affairs may change with the promised (eventual) Android 4.0 update is unclear, too. Already, I've seen apps offered in the Android Market that warn against a one-size-fits-all Android 4.0 app version; instead, the people behind these apps argue that smartphones and tablets need different versions, each optimized for a different set of screen sizes. If developers continue in this vein, Android 4.0-compatible apps may not become as unified as Google hopes they will, and a tweener-size phone/tablet may continue to be lost in the crowd, regardless of the OS installed on it.

The app part of the equation will be the hardest of the tablet-specific components for devices like the Galaxy Note to crack. The 5-inch-class display is roomy, but it's not big enough for the split-screen layouts that tablet-optimized apps commonly use. As a result, you may be left with the feeling that you're using your apps on a ginormous smartphone--which is precisely what you're doing.

Where, exactly, does the Galaxy Note fit in the pantheon of shiny slabs with touch displays? Considering that the Galaxy Note is exclusively available in the United States via AT&T's 4G LTE network, the question may be moot. With no Wi-Fi-only variant available, you're likely to buy the Galaxy Note only if you want it as a phone, and not a tablet with a data plan. The app question further solidifies the Galaxy Note's position as generous-size phone. It might work well for tablet shoppers who want a mostly pocketable device good for midscreen ebook reading and media playback, but its less than optimal for other tablet uses.