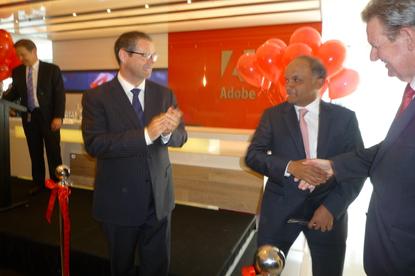 Adobe's CEO, Shantanu Narayen, was today quizzed over the Australian pricing of Adobe software products at the launch of the software company's new office in Sydney.

Adobe, along with Apple and Microsoft, has been summonsed to appear in Canberra on 22 March for a public hearing on IT pricing. The summons has been issued by a parliamentary inquiry that is examining the difference between IT and digital goods pricing in Australia compared to other countries.

Following the summons Adobe dropped the price of its Creative Cloud offering in Australia to be more aligned with its pricing in the United States.

The service-based offering previously cost $62.99 a month for an online annual subscription and has been reduced to $49.99, Adobe said in a statement.

Narayen did not provide a reason for the misalignment of prices at the office opening but instead, he drew attention to the Australian market being an attractive place to expand due to the strong adoption of cloud and digital marketing services.

"The innovative and adaptive nature of business ... [makes] it a very forward-looking, fast-moving region. The calibre of talent we draw from here is also very strong,” he said.

Adobe launched its Creative Cloud offering in April 2012 for individuals and expanded its offering to small and medium businesses in Australia last month.

The software giant's new office is located in Sydney’s CBD and is staffed by 180 employees.

It includes a demonstration facility and training centre and will be the base for Adobe’s Talent Acquisition services and Centre of Excellence for Enterprise Engagement across Asia and the Asia-Pacific region.