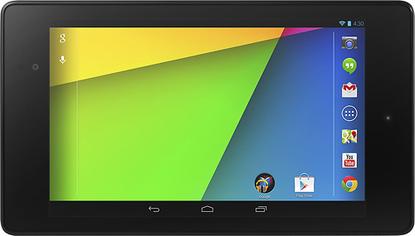 The device offers numerous enhancements over the original Nexus 7 tablet that Google released last year. It is also the first device to ship with Android Jelly Bean 4.3, the latest version of Google's mobile OS, the company announced Wednesday.

The product was introduced by several Google executives during a meeting hosted by Sundar Pichai, head of Android, Chrome and apps at Google.

Improved portability, speed and graphics comprise the major enhancements to the Nexus 7 tablet. The device will be available in three models: a 16GB Wi-Fi version for US$229, a 32GB Wi-Fi model for US$269, and a 32GB 4G version for US$349. Australian pricing has not yet been announced.

The new Nexus 7 will be available to order in Australia from next Tuesday, along with the United Kingdom, Canada, Germany, Spain, France, Japan and Korea.

In terms of portability, the new Nexus 7 is almost two millimeters thinner than the original and about 50 grams lighter. The device features a 7-inch display, the same size as its predecessor, but packs in more pixels, Google said, going from 1280x800 to true 1080p HD at 1920x 200 pixels in the new model. It also can show a 30 per cent wider range of colors and has dual stereo speakers for virtual surround sound.

The tablet also sports dual cameras, with a 1.2-megapixel camera in the front and a 5-megapixel lens in the rear.

Internally, the Nexus 7 features a 1.5Ghz Snapdragon S4 Pro processor, giving it a four-times-more-powerful graphics processing unit than the original Nexus 7, Google said. The CPU is also 1.8 times faster, Google said, and the system memory has been doubled to support 2GB of RAM.

The Android 4.3 software on the Nexus 7 also includes a new restricted profiles feature to give users more controls over who else can access certain content and apps on the device.

Since its launch last year, Google's Nexus 7 has accounted for more than 10 percent of all Android-based tablets sold, Google's Pichai said.

"Nexus 7 has been a big hit, and we're going to try to follow up with another one," said Hugo Barra, product manager at Google.

In recent years Google's product portfolio has expanded significantly beyond its bread-and-butter search technology. In recent months there has even been talk of Google opening brick-and-mortar retail stores to boost its efforts in selling hardware like tablets and also laptop computers with its Chromebooks.