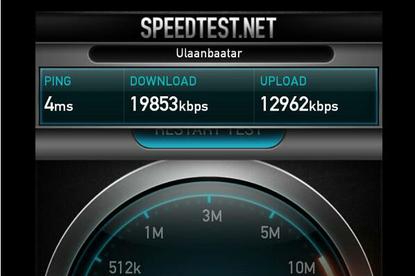 Speedtest in Ulaanbaator, Mongolia, conducted by a Computerworld journalist.

Australia has finally beaten Mongolia in average internet download speeds, according to the Net Index by Speedtest.net.

Australia now ranks 50th in the Households Download Index with an average speed of 13.64Mbps.

This compares to Mongolia, which ranked 52nd with an average download speed of 13.25Mbps.

Australia previously ranked 45th when it came to download speeds with 13.09Mbps, beaten by Mongolia which ranked 43rd with speeds of 13.80Mbps.

How fast is your internet? Check out Good Gear Guide's broadband speed test

However, Mongolia trounced Australia when it came to upload speeds, with Mongolia coming in at 23rd with 10.40Mbps. This compares to Australia, which came in at 95th with a measly 2.42Mbps.

Luxembourg, which is one of the smallest countries in Europe, also topped the upload list with average speeds of 86.72Mbps and Burkina Faso recording just 0.27Mbps for uploads.

The index compares download and upload speeds around the world from February 2011 to August 2013 where the average distance between the client and server is less than 300 miles (483km).