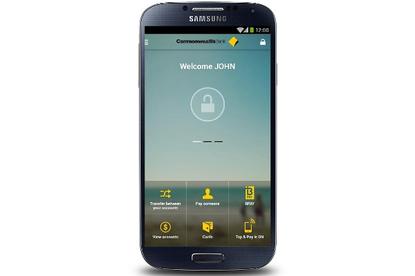 The CommBank app on a Samsung Android smartphone

Not to be outdone by one of its fiercest competitors, Commonwealth Bank (CBA) today unveiled an enhanced app using near field communication (NFC) technology that allows users to bank and pay for products and services with their mobile phone.

In October, CBA unveiled small payment tags designed to attach to a user’s smartphone. The tags enable users of the app to make contactless payments of up to $100.

This is a smart sticker called PayTag that attaches to the back of an Android or Windows 8 smartphone and is activated through the CommBank app for $2.99. PayTag will be available for the Apple iPhone in January.

People using the Samsung Galaxy S4 (i9505 and i9507) can use the smartphone’s embedded NFC to make contactless payments using the app without the need for a sticker, CBA said.

This latest CBA announcement follows the release on Wednesday of a new mobile payments service by Westpac and Visa.

The Westpac service – which starts in early 2014 – uses NFC technology to enables users to pay for products and services in store by tapping their Android smartphones against payment terminals. It is unclear exactly which Android phones will be compatible.

Lisa Frazier, executive GM, digital channels at CBA claimed that Tap and Pay is the only solution of its kind in Australia that enables customers to control the contactless functionality, “selecting which account to pay from, to turning it on and off as they need”.

“We’re in an exciting position where a mobile wallet is becoming a genuine possibility for customers," Frazier said.

The CommBank app can be downloaded from the Google Play Store and Windows Store.