Toyota drives in test version of FCV hydrogen car, headed to market in 2015 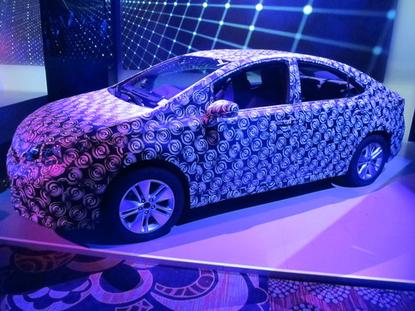 Toyota showed off an engineering prototype of its Fuel Cell Vehicle (FCV) at the Consumer Electronics Show in Las Vegas. The zero-emission hydrogen-powered car is expected to launch in 2015.

Toyota chose the International CES this week to exhibit a test version of its zero-emission Fuel Cell Vehicle (FCV) concept car, which was unveiled at the Tokyo Motor Show last fall.

The automaker has been testing four engineering prototypes of the hydrogen-powered vehicle in such disparate and extreme North American climates as Yellowknife and Death Valley.

"We aren't trying to reinvent the wheel, just everything necessary to make them turn," said Bob Carter, senior vice president of automotive operations for Toyota Motor Sales U.S.A., as journalists snapped photos of the camouflage-taped test vehicle. It was displayed alongside an FCV production mockup in brilliant blue.

"Fuel-cell electric vehicles will be in our future sooner than many people believe, and in much greater numbers than anyone expected," Carter said.

The FCV mockup is a four-door midsize sedan that runs on hydrogen, producing total power output of more than 100kW. It can do zero to 60 mph in 10 seconds and has a top speed of at least 100 mph. Its range would be 300 miles (482 kilometers) on a single fill-up, which would take three to five minutes at a hydrogen fueling station.

Toyota says it will market the car in 2015 at a "reasonable price," though it won't specify that for now.

Toyota says it is bullish on fuel cells because it has seen price improvements in materials, design and manufacturing that would allow it to sell the FCV at a price point that isn't exorbitant.

"Compared to battery electrics, the rate of cost reduction we have seen in fuel-cell electric technology has been staggering," Carter said.

The FCV emits only water vapor. Aside from its green credentials, something that may endear the FCV to future drivers is its ability to serve as a backup household power source. The eventual production version would be able to power an average house with emergency electricity for a week, Carter said, adding that engineers are working on an external power-supply device to do that.

The car will initially launch in California, which has approved more than US$200 million in funding for as many as 100 fueling stations by 2024.

There are now only nine such stations open to the public in the state, according to the California Fuel Cell Partnership. However, Toyota remains optimistic.

"This infrastructure thing is going to happen," Carter said.