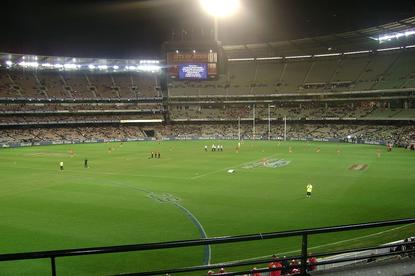 The telco said the test is the world’s first stadium trial of LTE-B, a wireless standard that allows it to broadcast one video stream to multiple people at the same time.

That approach, which is similar to how TV stations send traditional broadcast video, is more efficient than the current method in which video is streamed separately to each customer.

In stadiums, Telstra said LTE-B could be used to let sports fans listen to live commentary, get real-time match statistics and watch replays and game highlights. Telstra said some of those uses will be tested at the T20 match.

Tonight’s trial will be conducted with Telstra network partner Ericsson, using content provided by Channel Nine with the approval of Cricket Australia and the Melbourne Cricket Club.

“When a large number of people gather in one place we often see a huge spike in the demand for data, which can stretch the capabilities of our network and affect our customers’ experience,” said Telstra executive director of networks, Mike Wright.

“This is particularly evident during sporting events with a lot of our customers looking to enhance the live event by accessing commentary or stats online.”

“LTE-B offers us the ability to deliver content more effectively and provide all users the same high quality service using one single stream of data. This streamlined process frees up the rest of the network to carry other data, voice and text messages.”

Telstra and network partner Ericsson completed a previous trial of LTE-B in October.

“We have successfully tested the technology in the lab, and tonight’s trial will give us valuable insights into how it performs in the real world—from both a user and technical perspective,” said Wright.

“We will use the results from trials such as this to refine the network and work with manufacturers and content owners to develop devices and applications in preparation for a commercial launch.”