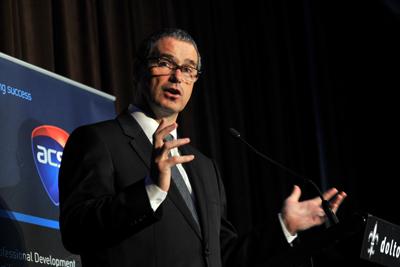 Senator Stephen Conroy has led criticism of NBN Co since the election.

NBN Co will soon trial a proposal by Aurora in Tasmania to string fibre along power lines to reach homes, according to NBN Co chairman Ziggy Switkowski.

In a Senate Estimates hearing today, he said NBN Co is looking for two or three communities to run a controlled trial of the plan and then compare the price to what fibre-to-the-node (FTTN) would cost.

NBN Co has not yet decided on when the Aurora would start, he said. Switkowski predicted the trial “might take us some time to do”.

Aurora, a state-owned utility, had made a submission to the Senate's NBN inquiry on the feasibility of stringing fibre along its power poles as an alternative to a more costly underground rollout.

The Labor party in Tasmania has promised it will give NBN Co free access to the Aurora infrastructure if Labor wins the 15 March election in the state.

In addition to the Tasmania trial, NBN Co will soon conduct pilots for fibre to the building and FTTN in Victoria and New South Wales, Switkowski said.

The building trial will test delivery of VDSL broadband to end users in 10 buildings in Melbourne, he said. The buildings will be connected by fibre and the VDSL will be used to get to each unit.

The FTTN test will happen in Umina on the Central Coast, NSW, and in Epping in Melbourne’s northern suburbs. The test will include 100 premises at each location, he said.

In his statement to the committee, Switkowski indicated that NBN Co has begun to turn around its operations.

“There remains much to do, but NBN Co is making progress in some important areas,” he said.

Switkowski said 38,000 kilometres of transit fibre has been deployed and 94 out of a planned 121 points of interconnect (POIs) are complete.

In addition, NBN Co remains on track to launch two satellites in 2014, he said. A review of NBN Co’s fixed wireless and satellite strategy will be completed in “just a few weeks”, he said.

However, “we are some distance from getting the entire project on track”, said Switkowski. “NBN Co is in a period of transition and this will continue for some time.”

NBN Co head of strategy JB Rousselot is heading a Transformation Management Office to align NBN Co staff on the new strategy outlined in December last year, Switkowski said. In addition, NBN Co is surveying employees to assist incoming CEO Bill Morrow on a review of the organisation, he said.

The fibre-to-the-premise rollout continues, Switkowski said. “Our aim is to stabilise the process and give contractors, suppliers and customers more visibility of forward plans, and greater certainty,” he said.

NBN Co plans to disconnect copper for the first 15 fibre serving areas on 23 May, he said. Premises in those areas will be required to switch to the NBN.

“We are working to ensure that this disconnection process is as smooth as possible and that everyone in these areas knows what to expect and what to do. This includes being very sensitive to the requirements of the more vulnerable people in our communities.”

Tempers flared at many times between Switkowski and Senator Stephen Conroy during the hearing. At one particularly heated moment, Conroy accused Switkowski of lying to the Senate and then refused to retract the statement when demanded by the chair.

The senators adjourned for a minute-long “private meeting” and Conroy retracted the statement upon their return.

One of Conroy and Switkowski’s disputes centred on whether “premises passed” is an effective way to measure the fibre rollout. That was the measure used by NBN Co prior to the election of the Coalition government.

“The focus on ‘premises passed’ led to a situation where running fibre up and down streets was prioritised over connecting it to buildings,” Switkowski said. “The result was a high number of premises that simply could not connect to the network despite being ‘passed."

“Your continuing representation that they couldn’t be connected is a … mislead of the Senate,” he said. “They could be connected once the design was completed.”