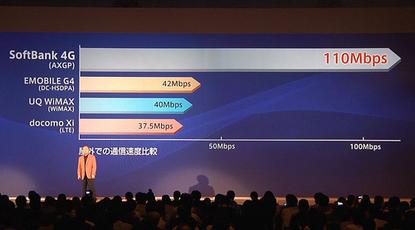 Softbank CEO Masayoshi Son discusses how his company's new high-speed mobile network will compare with the competition in Japan.

The CEO of Japan's SoftBank mobile carrier promised to bring stiff price and speed competition to the U.S., saying he feels an obligation to improve slow speeds and drive down prices.

SoftBank founder Masayoshi Son credited his years in high school and college in the U.S. as essential to creating his entrepreneurial spirit, and he feels a debt to his "second home."

He promised a Washington, D.C., audience Tuesday that SoftBank's mid-2013 acquisition of Sprint will give the carrier the ability to drive lower prices and deliver faster speeds than are now available in the U.S., with Sprint eventually providing 200Mbps service across the country.

Son, in a biography-heavy speech before the U.S. Chamber of Commerce, didn't mention a potential merger with mobile competitor T-Mobile USA, although he was quoted in a newspaper article Wednesday as saying he would start a "massive price war" in the U.S. if he were able to merge Sprint and T-Mobile.

U.S. mobile and fixed broadband services are lagging behind much of the rest of the world, Son said. Download speeds for LTE service in the U.S. were 15th among 16 nations researched by OpenSignal in February, with the U.S. averaging 6.5Mbps, Son noted.

"How can the American people accept that fact that it is No. 15 for the most important highway -- the information highway -- for the next century?" Son said. Broadband speeds in the U.S. are "terrible," he added.

At the same time, U.S. mobile customers pay among the world's highest rates for mobile data, Son added. U.S. carriers' revenue per customer a month is US$52, compared to $44 in Japan and $33 in South Korea, he noted.

Son repeated his company's plans for Sprint Spark, an effort to bump up LTE speeds on the carrier's network. Announced in November, Spark is the company's plan to use three bands of spectrum to bring mobile speeds of up to 60Mbps to 100 U.S. cities in three years.

The goal, eventually, is for Sprint to offer 200Mbps mobile service across the U.S., providing competition for both mobile and wired broadband carriers, Son said. Sprint's service would compete in the large swaths of the U.S. that have two or fewer wired broadband providers, he said.

Son's vision, he said, is to shake up the U.S. broadband industry and put the U.S. back on top of the world's broadband race.

"We've got the technology" to compete with wired broadband providers, he said. "We'd have to deploy the many towers and cells. I'd like to give it a shot."

Critics of Son's said his analysis of the U.S. mobile industry was flawed.

"The notion that U.S. broadband and mobile are lagging is simply false, and dangerous -- because it is being used as a pretext for massive new regulation of the Internet economy," wrote Bret Swanson, president of Entropy Economics, in Forbes.

While Son argues for more market competition, Sprint has asked the U.S. Federal Communications Commission to limit the amount of spectrum competitors AT&T and Verizon Wireless can buy at auction, Swanson noted.

Son is "right that wireless is an increasingly effective partial substitute for wired broadband," Swanson wrote. "But the key limiting factor is spectrum -- where Mr. Son's own Sprint already reigns as spectrum king -- not a failure of investment, technology, or too little oversight from Washington."