Launched in the lead-up to GovHack, the map allows government geospatial datasets to be visualised 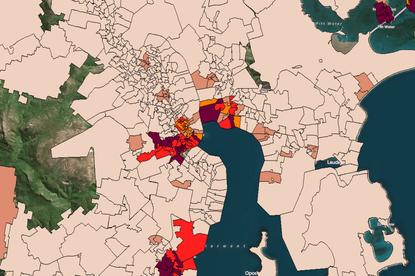 The federal government has launched an online map of Australia that allows users to overlay geospatial datasets made available by agencies.

The National Map is a joint effort by the Department of Communications, NICTA and Geoscience Australia.

The datasets are sourced from Geoscience Australia, the Bureau of Meteorology, the Australian Bureau of Statistics and the government's data.gov.au open data repository.

Data that can be overlayed on the map include data broadband quality and availability, sourced from the government's MyBroadband program. Other data includes terrain, vegetation, utilities, infrastructure, water, vegetation, habitation and boundaries

A range of open source software and frameworks has been used for the site, including Cesium, Leaflet, Geoserver, jquery, URI.js, proj4js, html2canvas, knockout, esri-leaflet.js, togeojson, and Tilelayer.Bing.js.

The site is currently in beta and is hosted by NICTA. Once the beta is complete it will be hosted by Geoscience Australia.

The map project was unveiled ahead of the annual GovHackevent, which will be held 11-13 July. GovHack is a hackathon that encourages developers to come up with ways to use government data.

This year more than 1200 people will participate in GovHack, according to the organisers.

GovHack events are being held in all state capitals, as well as Canberra, Ballarat, Mt Gambier, Cairns and the Gold Coast.

"This is the year we are seeing the Australian government recognise the value of open data and the real benefits to the Australian people," even co-ordinator Pia Waugh said in a statement.

"We see it as a critically important step for policy makers and technologists in government to get involved at the grassroots level," Waugh said.

"You can achieve a lot in 48 hours when you get the right people in the room together and GovHack provides governments with that opportunity."