In wake of Cloud and mobile push, IBM revenue flattens

Profit jumps compared to a year ago, when the company took a restructuring charge 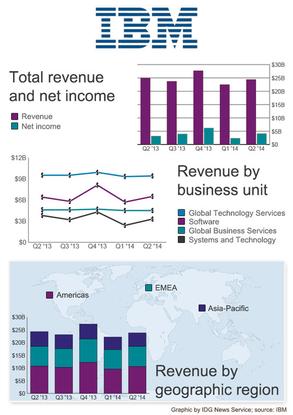 IBM's earnings for the past five financial quarters.

Despite a hearty push into Cloud services and enterprise mobility, IBM continues to experience difficulty in raising revenue, though second-quarter profit jumped compared to a year ago.

IBM's second-quarter revenue was $US24.4 billion, down 2 per cent compared with $US24.9 billion in the second quarter of 2013, the company has announced.

Despite sluggish revenue, the company did make headway in increasing profit, which was up 28 per cent year-over-year, to $US4.1 billion.

Part of the bump comes from comparing the profit from last year, which was abnormally low due to a billion-dollar charge the company took for workforce rebalancing.

"Last year's profit base was lower due to a workforce rebalancing charge of about a billion dollars," said Martin Schroeder, IBM chief financial officer, in a conference call with investors. IBM also worked to trim costs and improve efficiencies this quarter, which also helped the bottom line.

"We are continuing to drive double-digit growth in the parts of our business that address emerging trends in enterprise IT," Schroeder said. "While some of these actions impact our earnings in the short term, they position our business for long-term growth."

The weak second-quarter revenue was similar to the first quarter of 2014, when the company's hardware revenue dipped by 21 percent.

IBM executives describe the company as being in a transition period. As a result, IBM expects revenue growth to be non-stellar as it moves to incorporate new technologies and services into its portfolio.

"In the second quarter, we made further progress on our transformation. We performed well in our strategic imperatives around Cloud, Big Data and analytics, security and mobile," said Ginni Rometty, IBM chairman, president and CEO, in a statement.

"We will continue to extend and leverage our unique strengths to address the emerging trends in enterprise IT and transform our business, positioning ourselves for growth over the long term," Rometty said.

The company noted, without giving specific numbers, that cloud revenue has been up more than 50 percent for the year. Business analytics also grew by 7 per cent, mobile revenue by 100 per cent and security revenue by 20 per cent, all year to date.

Revenue from IBM's Systems and Technology hardware segment was $US3.3 billion, down 11 per cent from the second quarter in 2013.

Revenue from the Global Business Services segment modified slightly, down 2 per cent to $US4.5 billion for the second quarter, which ended June 30.

Revenue from the software business grew modestly. For the second quarter of 2014, the software group logged $US6.5 billion in revenue, a 1 per cent increase from $US6.4 billion in the same quarter a year ago.

IBM has been busy building up new streams of revenue.

On Monday, the company announced that its cloud service attracted a number of new large enterprise customers, including the Whirlpool appliance maker and the Macy's department store.

Last year, IBM acquired cloud services provider SoftLayer for $2 billion, and subsequently has started to invest another $1.5 billion in extending the SoftLayer cloud to run on 40 data centers across the globe.

On the mobile front, IBM announced Tuesday that it had partnered with Apple to support Apple's portable telephones and tablets in the enterprise, as well as provide a line of business software for the devices. The partnership could open a potentially new line of business in making Apple products, beloved by consumers, suitable for business use.

To mend fraying relations with the Chinese government, which put a halt to buying IBM equipment and services as it goes through an IT reorganization, IBM has donated $100 million worth of analysis software to Chinese academic institutions.

The company also pleased investors, paying out $4.12 per share, up 34 percent from a year earlier.