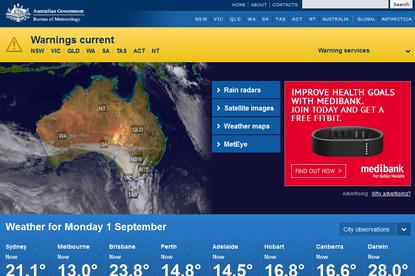 The Senate late last week passed legislation that amends the Meteorology Act 1955 to make clear that the Bureau of Meteorology can run commercial advertising on its online services.

The Meteorology Amendment (Online Advertising) Bill 2014, which received bipartisan support from the Coalition and Labor but was opposed by the Greens, follows the introduction in April last year of ads to bom.gov.au.

The federal government announced in the 2012-13 budget a trial of ads on the site.

The Munro review — Review of the Bureau of Meteorology ’s capacity to respond to future extreme weather and natural disaster events and to provide seasonal forecasting services — released in December 2011 raised the idea of adding online advertising to the site as a possible new revenue source for the agency..

The step was rejected by previous reviews in 1997 and 2008, the report by Chloe Munro noted.

"Since 2008 annual hits to the Bureau’s website have increased from 9 billion hits to approximately 33 billion, making it one of the most frequently visited websites in Australia. Over the same period there has been a rapid evolution of online business models including both free and subscription news services," the report stated.

"Arguably there is greater public acceptance of advertising as part of the online ‘contract’ and comparable meteorological agencies internationally do carry advertising on their websites – including the UK MetOffice, Canadian Weather Office and New Zealand Metservice.

"Given the budgetary challenges faced by the Bureau in meeting growing demand for all its services, this Review considers it would be worth revisiting the question."

Advertising on bom.gov.au is managed by Digital Network Sales. According to DNS, the site currently gets more than 230,000,000 page impressions per month. The site only accepts basic 300x250 jpeg, gif or Flash-based ads.

The new legislation requires the BoM's director to develop and publish advertising guidelines. The current guidelines prohibit a range of advertising topics, including alcohol, tobacco, gambling and political ads, and ban a number of formats, such as pop-ups and expanding ads.

During the debate on the bill Greens Senator Scott Ludlam decried "creeping commercialisation allowing government to gradually abandon and withdraw responsibility for funding a service that all Australians, whether they know it or not, deeply depend on from the day-to-day mundane all the way through to the critically important enabling research and modelling on what our climate is doing".

"In forcing an entity like the bureau to run advertising on its web presence—which, as Senator Singh has acknowledged, has a lot of eyeballs, presence and reach—although it obviously boosts the fortunes of the bureau, we will find the Australian government removing a dollar for every dollar that is raised in advertising," the Greens senator said.

Labor's Lisa Singh said the bureau was not the first national forecasting service to carry paid advertising. "It is already done in Canada, the UK, New Zealand, France and Denmark," the senator said.

"We are not entering uncharted territory at all here. It is already done in other countries and it has been trialled here in Australia."