Are Microsoft's 'Chromebook killers' better for the enterprise?

Low-priced PCs like HP Stream run Windows apps, but there are other things to consider, say analysts. 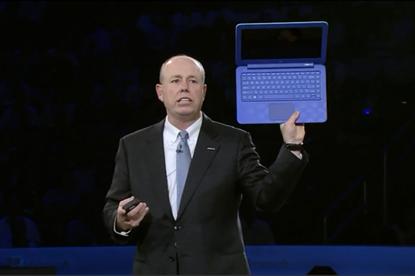 Microsoft reveals the HP Stream, a $299 device competitive with the Google Chromebook.

A wave of inexpensive Windows laptops meant to compete with the Google Chromebook is coming, but analysts say enterprises should carefully consider their requirements before choosing a low-cost device from either company.

According to recent reports, Microsoft is helping its OEMs slash prices with Windows 8.1 with Bing, which is the same operating system as Windows 8.1 but with Bing as the default search engine in Internet Explorer.

In July, Microsoft showed off the HP Stream, a laptop designed to take on the Chromebook. HP officially revealed the 14-inch device today at a price of US$299.

The cheaper price takes away the price advantage of Chromebooks, which are typically sold at prices between $200 and $500. And the Windows PCs come with an obvious benefit — they run Windows applications.

“It’s not easy to turn around nearly two decades, since Windows 95, of Windows use in business and many applications will have a simpler migration path from an office desktop to a low-cost notebook running Windows 8.”

Then again, organisations seeking to embrace the cloud might want to move away from the traditional Windows experience, he said.

“Businesses are seeing the Google Chromebook as a way to enable a more collaborative enterprise that is less tied to a client device – the cloud works everywhere – while still having the option to support Windows applications [through virtualization] if needed.

“Without tightly integrated cloud services, low-cost Windows machines still carry the burden of being seen as ‘just another Windows client’ regardless of the price.”

For industries like education that have embraced the Chromebook, a cheaper Windows PC is unlikely to win them back to Microsoft, according to Gartner analyst Tracy Tsai.

“They use Chromebook not just for the low cost but for the easy device management, as all the students access the data from the cloud, not from the devices. Schools can easily pass those Chromebooks from graduates to other students.”

The success of a Microsoft “Chromebook killer” may ultimately depend on the quality of Microsoft’s cloud services, said Gedda.

“A value proposition for enterprises with ‘post-PC’ devices is the cloud services they ship with. You don’t just buy a Chromebook because it’s running Chrome OS; you buy one because you want to use Google’s cloud services,” the analyst said.

Low-cost PCs like the HP Stream and the Chromebook will not work for every employee in the enterprise, said Tsai.

“For enterprise, price is not the only issue,” Tsai said. “Some require high productivity performance, speed processing power, longer battery lives, and so on. The impact of those low-cost PCs will be … more limited to the entry-level task workers.”

Organisations should remember that the initial price of the device is just be one part of the total cost of ownership (TCO), said Gedda.

“From a capital expenditure point of view price reduction is good, but businesses must always look beyond the initial purchase price to include management, application support and security as part of the TCO.”