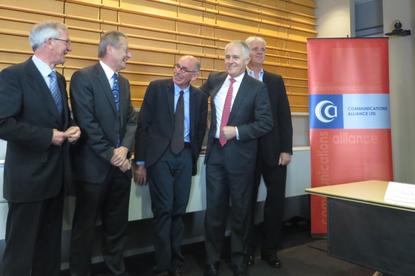 If Telstra were to compete against NBN Co, it would change the economic model for the National Broadband Network, NBN Co CEO Bill Morrow has said.

Telstra could be mulling whether it should copy TPG’s plan to compete against the NBN, according to reports.

Speaking at a Communications Alliance panel Friday morning, Morrow agreed this could be an issue for the NBN business model.

“If Telstra were allowed to go into this, and Telstra then had Optus follow and others, then it becomes material in nature, staying within that $29.5 billion and having the requirements of the speed, universal access, same price [and] all of those other factors, yes, it becomes a problem.”

However, if Telstra were to try to compete, it would be constrained by the structural separation undertaking, said Henry Ergas, a professor of the University of Wollongong and a member of the Vertigan panel that recently issued a cost-benefit analysis.

“Whatever response [Telstra] wanted to engage and whatever conduct it wanted to undertake going forward, be it in response to TPG or any other area, it would have to be consistent with that structural separation undertaking,” he said.

Yesterday morning, the ACCC concluded that TPG had not run afoul of anti-cherry picking rules with its plan to roll out fibre-to-the-basement services in urban areas.

NBN Co has stated before that the TPG plan could upset the NBN business model, which depends on selling services in major urban areas to subsidize the higher cost of serving regional areas.

After the ACCC decision came out, Communications Minister Malcolm Turnbull said he would begin consultations on imposing a new telecommunications licensing condition that would force network operators that want to compete with National Broadband Network infrastructure to split their wholesale and retail operations.

From a technical perspective, vectoring VDSL technology does not work if there are two providers going to different lines in one building, he said. “The technology itself screams out for wholesale access.”

Turnbull said the government is aware that it’s possible NBN Co will have to go to market to raise funds in the future.

“That issue is hiding in plain sight,” he said. “I’ve discussed it with all of my colleagues. We are keenly aware of it.”

While there has controversy about changes to the direction of the NBN, Morrow said it’s time to stop arguing and implement the current plan for a multi-technology network.

“If you fiddle around, and you continue to doubt and you take a left turn and a right turn, nothing gets done and money gets wasted,” the NBN Co CEO said.

“There is a point in time when we just have put our foot down and say this is it – we’re going to get this thing going and we’ll consider our options at a different time. Let’s right now get access to everybody in the country. Let’s get them a decent speed and let’s not spend money that we don’t really have.”