The tool provides an alternative to traditional social sign-in 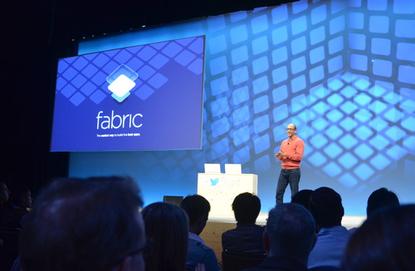 Twitter CEO Dick Costolo, speaking about the new Fabric platform for mobile developers at the Flight conference in San Francisco.

Twitter is opening its nest to more mobile developers, with a new service for easier app sign-ins.

The company on Wednesday began rolling out "Digits," an alternative tool mobile developers can use to let people sign in to their apps instead of using their email or other social account credentials.

It's one of a range of new features included in "Fabric," a new platform for app developers designed to help them build, grow and monetize their apps, which Twitter also announced Wednesday.

Fabric was developed from some services Twitter has already made available for developers, like its Crashlytics service for crash reports and its MoPub mobile advertising system.

Digits, however, is entirely new. "It makes mobile sign-up frictionless, providing an identity relationship between you and your users," Twitter CEO Dick Costolo said to an audience of roughly 1,000 mobile developers at the company's inaugural "Flight" conference in San Francisco.

With Digits, app developers can incorporate a button into their sign-up page prompting users for their phone number. The user enters it, and Twitter sends an SMS message to his or her phone for confirmation.

Digits is available for iOS, Android and also the Web, in 216 countries in 28 languages, Twitter said. McDonald's is an early partner already using it in its mobile app.

Fabric, which Twitter has been building over the past year, organizes a number of mobile software development kits for developers into a single platform. Besides Digits, it also includes tools for developers to track the effectiveness of their ads, through MoPub, and a new SDK to let developers more easily embed tweets in their apps.

All of the tools, at this point, are free. With Fabric, Twitter is hoping to get developers back on its side, with a more open platform than its had in years past. Eventually Twitter may start charging for more advanced tools.