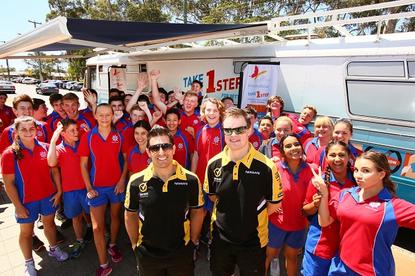 Norton Hornet drivers Michael Caruso (left) and James Moffat with students at Aquinas College in Queensland. The drivers discussed cyberbullying with the students as part of a beyondblue tour.

Beyondblue CEO Georgie Harman said the money would be used to develop a free online video and information guide for parents.

According to Symantec Pacific managing director and vice president, Brenton Smith, most children do not report cyberbullying incidents when they occur and parents have limited knowledge of how to help their children deal with cyberbullying.

“We want to educate children and parents about what they can do to reduce the impact of cyberbullying and we hope our donation to beyondblue will go some way to help break the connection between cyberbullying, depression and suicide,” he said in statement.

In September 2014, World Vision Australia was given $4 million worth of Microsoft software including Office Professional Plus 2013, SharePoint, Lync and Dynamics customer relationship management (CRM) Online.

According to World Vision Australia CEO Tim Costello, the Office and Lync software will be used by the not-for-profit’s staff for online collaboration between its Australian offices. Dynamics will be used to upgrade its CRM system so it can send targeted information, such as emails, to World Vision supporters.