A transformative acquisition and overtaking SAP in applications are just a couple of the goals he may have in mind. 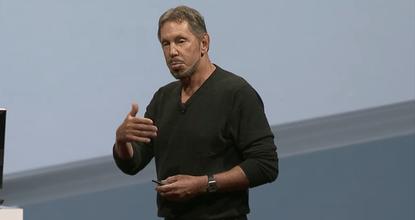 Larry Ellison may no longer be CEO of Oracle, but he's not going anywhere anytime soon. Indeed, as executive chairman and CTO, Ellison is now in a position to focus solely on creating new products and services that will cement his legacy as he enters the twilight of a legendary career in tech.

Oracle declined to make Ellison available for an interview, but here's a look at some possible goals he has in mind before he finally hangs up his hat for good.

To be number one in applications

Ellison likes to talk trash about the industry's largest business application vendor, SAP. His one and only tweet to date even took a slap at SAP, saying the company had "nothin'" but SuccessFactors for cloud applications until 2020, while Oracle already has 100.

His tweet's basic lack of accuracy aside, it adhered to an Ellison pattern: Wave away and even mock rivals, while plotting a path to overcome them.

Ellison, like SAP, has made a series of acquisitions to get a foothold in the SaaS (software-as-a-service) market and round out its on-premises app portfolio, which was built through mega-acquisitions such as PeopleSoft.

A skeptic might question whether being number one is necessarily important, given Oracle is still making billions and billions of dollars in applications.

For Ellison it is, according to one observer.

"Larry likes to be the visible winner at what he does," said analyst Curt Monash of Monash Research.

To make (at least) one more transformative acquisition

Oracle has made plenty of acquisitions over the past couple of years, but it hasn't made one comparable in symbolic significance to the purchase of Sun Microsystems in January 2010. That move gave Oracle control of Java, which much of its software is already written in, but most of all Sun got Oracle and Ellison into the hardware business.

Rumors have swirled for years about Oracle buying Hewlett-Packard, a deal that would greatly expand its hardware footprint and also give it a sizable IT services business.

An Oracle-EMC tie-up has also been a favorite topic of speculation. Such a move would give Ellison a fistful of new weapons to battle Oracle's long-time rival IBM, while actually giving Oracle perhaps the broadest catalog of products in all of enterprise technology.

Oracle's Exadata database machine, first released in 2008, marked its entry into the hardware business, sort of. Oracle's real goal with systems like Exadata is the profits generated by all the lucrative software licenses customers load into them.

While Oracle has released a series of additional "engineered systems" since Exadata, it's been reticent to give specifics about how well those have been selling. In contrast, Exadata seems to be driving the bulk of engineered systems business.

Oracle will surely continue releasing newer, faster versions of Exadata, but one has to wonder if Ellison would like to come up with a new system that matches Exadata's success.

If Oracle has lagged competitors in any areas, they are PaaS (platform as a service) and IaaS (infrastructure as a service). Only now, after years of development have its offerings in those areas become hardened and generally available in most respects.

Ellison and Oracle are staring at stiff competition from earlier movers in IaaS and PaaS, from Amazon Web Services to Microsoft Azure.

While Ellison and other Oracle executives say the company's IaaS pricing will be competitive with Amazon and others, it could be that Oracle has tempered profit expectations for that segment and views it more as necessary to simply have on the menu.

It's a much different story with Oracle's PaaS, which Ellison pushed hard during his keynote sessions at the recent OpenWorld conference.

Portability and convenience are two selling points, with customers able to move on-premises Java applications to the service with "a push of a button," as Ellison put it.

While touting Oracle's progress, Ellison acknowledged the long road ahead. "We're just getting started," he said.