Robots lighten the load at The Catch Group warehouse 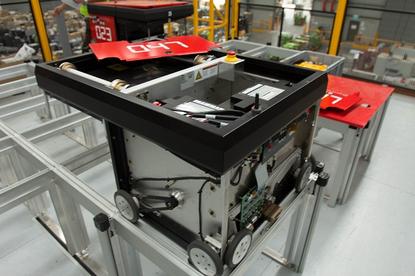 One of the 70 robots in action at The Catch Group warehouse.
Photo credit: Dan Gray, Catchoftheday.

The Catch Group is using 70 robots in its Melbourne warehouse to retrieve products and deliver bins to stations where humans than process orders. This has sped up processing times from 15,000 orders a day to 25,000 orders every day.

The company operates several websites including Catch of the Day, Scoopon, Groceryrun, Eatnow, Yumtable and Mumgo.

Last month it rolled out Swisslog’s Autostore, an aluminium grid which contains 25,000 bins. Seventy robots run across the grid to retrieve product orders.

The Catch Group co-founder and director Gabby Leibovich said that in order for the company to stay competitive, automation was inevitable and “the next step to take.”

“Our biggest problem has been the ability to offer a wider range of goods. In order to be able to ship 6000 products, robotics was something we had to move towards,” he said.

“Around the fifth of December, we usually get a call from our logistics people requesting the salespeople in the office to slow down sales because they could never keep up with orders. We used to ship up to two weeks later and that’s unacceptable.”

Now, with automation, The Catch Group is shipping products within 24 to 48 hours.

"The warehouse automation is lightening the load on our warehouse team, who until recently, would have to walk kilometres everyday picking and packing orders using a trolley on a floor the size of the Melbourne Cricket Ground," he said.

According to Leibovich, using robots will also allow The Catch Group to sell for five extra days in December, translating to millions of dollars in sales. Over the past few days, it has sold over 42,000 items a day.

Currently, the robots work from 6am to 3pm alongside employees. Leibovich said there are no plans to replace any more human workers with robots.

“I don’t see robots replacing anyone of our 300 office staff who deal with marketing through to sourcing new deals. Having said that, I’m sure robots will enter lots of other parts of the [retail] industry and will keep disrupting it.”