Solar fuel cell can provide backup power to an exchange for up to eight hours, says Telstra 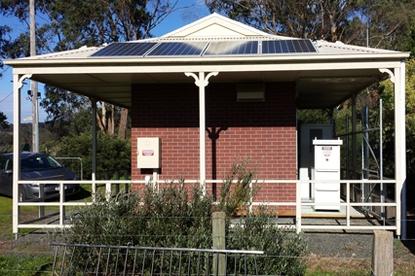 Telstra has reported success with a solar-based backup power system installed at an exchange in Victoria.

The exchange is located about 90 kilometres east of Melbourne in an isolated locality bordering the Yarra Ranges National Park. Telstra installed the solar backup power system one year ago and in the past six months has used it six times to provide back-up power.

“These mains power outages have range from as short as 12 minutes to over seven hours,” Telstra director of assets and facilities management, John Romano, wrote on the Telstra blog. “Each time the fuel cell has cut in to seamlessly keep our customers connected.”

Telstra worked with suppliers Sefca and Acta on the design of the backup power system.

“What makes our solar fuel cell unique is the fact that the hydrogen (fuel) is being generated from the onsite water using renewable energy (solar),” said Romano.

“The accumulated hydrogen is then stored and used to generate electricity whenever it is needed. The system currently has the capacity to supply power for up to eight hours.”

Telstra plans to deploy additional solar fuel cells to provide backup power at other network sites around Australia, while also continuing to research other alternative renewable energy production and storage techniques, he said.

Powering the network is a key challenge for Telstra, he said. A power outage led to a service outage at Telstra as recently as last week.

“Without power the network doesn’t operate and, in a country the size of Australia, with all its climatic variability, maintaining a constant and reliable power supply remains a perpetual battle.”

While Telstra explores ways to use alternative energy to power the network, Microsoft researchers have recently revealed a method to use light beams to charge mobile devices.