Deloitte predicts 're-enterprisation of IT' in 2015 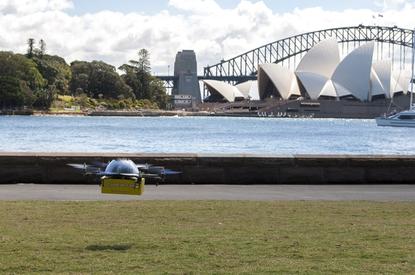 A commercial drone under trial by Australian startups Flirtey and Zookal could be used for textbook delivery. Credit: The PR Group

Stand aside, consumers – the enterprise will drive growth of drones, wearable devices and 3D printing in 2015, according to Deloitte.

In its annual Technology, Media & Telecommunications (TMT) Predictions, Deloitte highlighted a trend shift from consumers driving innovation in the business – the consumerisation of IT – to businesses taking the lead on key new technologies.

Speaking at a media presentation in Sydney today, Deloitte TMT risk service partner, Dennis Moth, termed this new trend the “re-enterprisation of IT.”

“We really believe that 2015 will be the inflection point where the pendulum swings back around technology adoption, back toward the enterprise in a number of areas,” he said.

The last decade was led by the consumer bringing smartphones, tablets and other technology into the enterprise, he said.

“Whilst there will continue to be noise around the consumerisation and the impact of consumers on new technologies, we’re really starting to see enterprise drive value creation and actually drive those technologies forward to wider use.”

Drones are one key area that will be driven by the enterprise, said Moth. While the use of drones will be “niche and specialised,” he said there are big opportunities for businesses requiring aerial observation or transportation.

Drones could replace helicopters in some businesses, or be used for dangerous operational situations that put human workers at risk, he said. In Australia, for example, Surf Life Saving is using drones to patrol beaches in Queensland, he said.

Globally, Deloitte predicted sales of non-military drones will be about 300,000 units, increasing the installed base to more than 1 million.

On 3D printing, Moth said 2015 won’t be the year when there is a “factory in every home.” Rather, most of the 220,000 predicted 3D printers sold globally will go into the enterprise, he said.

Moth said 3D printers will be especially useful for small and medium enterprises (SMEs) to do small-scale rapid prototyping and iteration before sending a product into manufacturing.

With Google Glass not doing especially well with consumers, Deloitte has predicted that the enterprise will pick up the slack and drive smart glasses forward. The glasses could be useful for any company that wants to provide workers with information while keeping their hands free.

Deloitte also expects the enterprise to drive the Internet of Things (IoT), a broader category that includes wearables but also any object with sensors and an Internet connection.

Globally, Deloitte expects there will be 1 billion wireless IoT devices shipped in 2015, a 60 per cent increase from 2014. That will result in a global install base of 2.75 billion IoT devices, it said.

“There is an opportunity to capture … insights around usage and how consumers actually interact with the products that can then inform marketing decisions,” said Stuart Johnston, Deloitte Australia TMT industry leader.

So far, use cases around IoT have mainly been about cost efficiencies rather than revenue generation, he noted.