Will Netflix be unmetered for Fetch TV customers? 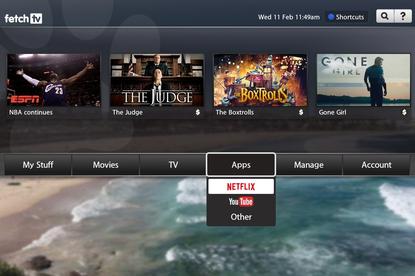 A deal between Fetch TV and Netflix could mean the subscription movie and TV streaming service won’t be metered on some ISP plans.

However, Optus and other ISPs that have deals Fetch TV have not said definitively how they will charge for Netflix usage on broadband plans that include data caps.

Fetch TV will include Netflix as an integrated app when Netflix launches next month, the companies announced this morning. To access Netflix, Fetch TV subscribers must have the company’s 2nd-generation set-top box, which was introduced in February 2013.

Fetch TV is available from iiNet, Optus and Dodo.

What remains unclear is how ISPs with Fetch TV will meter usage of Netflix, which is available in HD and has greatly increased broadband customers’ data consumption in every market it’s entered.

While Fetch TV is offered as an unmetered service on some ISP plans, today’s deal does not necessarily mean that Australian ISPs will extend these offers to Netflix offered through Fetch TV.

“The Netflix app will operate in the same way as YouTube and the FTA Catch up TV Services, so the data won't automatically be unmetered,” Fetch TV marketing director Sue Brenchley told Computerworld Australia.

“Optus and Dodo offer Fetch TV on unlimited plans where metering isn't an issue,” she added. “It's a question for the ISPs as to whether they will choose to unmeter the Netflix traffic for Fetch TV customers that aren't currently on unlimited plans.”

An Optus spokesperson said Netflix via Fetch TV will be unmetered on its unlimited data plans. The telco’s unlimited data broadband bundles cost $90 a month under a promotion ending 6 April.

Optus is working with Fetch TV on options for Netflix usage on capped broadband data plans, she said.

iiNet, which also offers unmetered Fetch TV, did not immediately respond to a request for comment.

“That is going to be one of the biggest competitive differentiators in that space going forward given that utilisation of people’s broadband has been steadily increasing, but the data allowances haven’t been growing as quickly,” he said.

Deals between video content providers and ISPs are expected to be a key dynamic in the streaming wars that are currently heating up in Australia.

Earlier this month, Foxtel said its new broadband plans will include unlimited streaming of Presto, the Foxtel-owned movie and TV streaming subscription service that will compete with Netflix in the Australian market.

Last week, Vodafone CEO Iñaki Berroeta said Vodafone will soon announce a deal with a video provider as it seeks to expand its content partnerships.

Optus CEO Allen Lew has also hinted that the telco will announce deals with content providers.

Netflix said it was attracted to Fetch TV in part due to the service’s ISP partnerships.

“As we surveyed the Australian market, Netflix was impressed by the Fetch TV service, unique business model, and the committed coalition of Telco partners,” said Bill Holmes, head of business development at Netflix.

“By partnering with Fetch TV, we are making it easy for TV fans and movie lovers to watch Netflix on their televisions.”

Fadaghi said the Netflix-Fetch TV announcement is not surprising given that Netflix will want to sign as many distribution partners as possible as it prepares for its March launch. It also makes sense for Fetch TV because it supplements their content, he said.

“It’s a reflection that Fetch TV recognises it’s not going to have all the content it potentially needs natively on its platform going forward. That must be a reality that it’s accepted now.”

IBRS analyst Guy Cranswick said the Netflix-Fetch TV deal “looks quite good for subscribers and may be a factor in considering what ISP to choose.”

However, Netflix and its partners’ success will ultimately depend on what content it’s able to bring to the Australian market, he said.