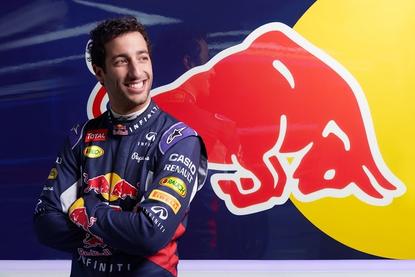 A managed network courtesy of AT&T allows the UK headquarters of Infiniti Red Bull Racing to collaborate during races in real-time with the drivers and pit crew at the Australian Formula One Grand Prix in Melbourne.

Computerworld Australia toured the Infiniti Red Bull Racing team’s garage ahead of this weekend's big race at the F1 Grand Prix in Melbourne to see the IT that is supporting drivers Daniel Ricciardo and Daniil Kvyot.

Every race weekend, the Infiniti Red Bull racing team transfers at least 200GB of data between the track and engineers based back at the team’s headquarters in Milton Keynes, UK, according to Al Peasland, head of technical partnerships at Infiniti Red Bull Racing.

While it takes an airplane nearly a day to travel between Melbourne and the UK, the Infiniti Red Bull Racing team can transfer data between the locations in 300 milliseconds over the AT&T managed network, he said.

Data transferred over the network includes performance statistics measured by about 100 sensors on the race car – including tyre pressure, suspension loads and G-forces felt by the car – as well as telepresence video and large CAD files containing 3D designs, he said.

Enabling collaboration across such a long distance is critical to the racing team’s success, said Peasland, because the F1 organisers limit how many people per team can physically be on site to 60. Infiniti Red Bull Racing’s 60 include just two IT workers.

“The idea is … the engineers at the race track here act as feel as they are in the UK, and the people in the UK are getting data from the car as though they were here,” he said.

The Infiniti Red Bull teams makes use of the network before, during and after a race. As part of pre-race preparation, the on-track team must collaborate with engineers back in the UK to tune the car for specific conditions at each race, he said.

During the race, the network gives the UK office real-time access to the car’s health monitoring so that they can provide strategic support to the race team and drivers while the car tears up the track, he said.

Afterwards, the team uses data from the race to modify the design of the car with the goal of improving the design before the next competition, he said.

An F1 rule change last year required teams to change from 2.4-litre V8 engines to 1.6 litre V6 turbo engines in their vehicles. With such a major change, collecting and analysing data on the car’s performance has become more important than ever, said Peasland.

"We knew that we would need more factory support in the UK when this thing was on the track,” he said. “We would need to look at more data more quickly.”

While 2015 is the second year since the change came into effect, it’s still very early days and the team has only increased the amount of data transmitted for analysis, he said.

"If anything, we're doing more and more.”

Also as part of the AT&T partnership, the telco provides smartphones and mobile device management.

Last year, it provided Infiniti Red Bull Racing with 200 Samsung smartphones including the Galaxy S5 and other models, said Peasland.

Peasland said the team is developing new mobile apps to give users access to more critical information on their smartphones.

Back in Milton Keynes, AT&T is upgrading connectivity at the team’s wind tunnel facility, which is used to test how a car will perform at high speeds. Peasland said the upgrade will increase the site’s bandwidth by ten times.

Also in the near future, the racing team will be implementing the telco's security event threat analysis tool and expanding its unified communications to include IP-based phone services, presence and videoconferencing, he said.

Adam Bender travelled to Melbourne as a guest of AT&T.