Final report due this December, issues paper coming next month 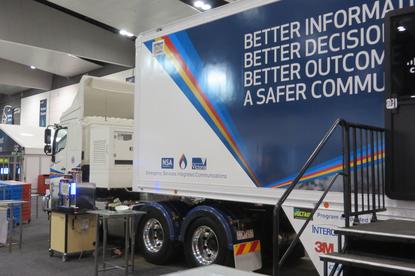 This National Safety Agency truck, shown at [[artnid:540961|Cisco Live last year]], can be rolled into sites for emergency and provide communications and monitoring gear for public safety.

The Australian government has asked how best to provide mobile broadband to public safety agencies by 2020.

The government asked the Productivity Commission to conduct a study that will provide a “first principles” analysis of the most efficient, effective and economical way to provide the capability.

The government also specifically asked the commission to consider the role of public-private partnership, as well as “national interoperability across jurisdiction and agencies, coverage, integration of voice services, security, capacity, resilience, sustainability of arrangements into the future and compatibility with end user devices.”

The interoperability piece is important because it would allow different public safety agencies to communicate in emergencies that cover large areas.

The commission will also consider domestic and international developments that might apply to Australia, it said. In particular, the government asked the commission to look for a policy that dovetails with the government’s broader spectrum review.

The final report is due in December this year. The commission said it will release an issues paper in late April to commence a consultation process with interested parties including industry, governments and public safety agencies. A draft report will be released in advance of the final report.

More details on the study are available on the Productivity Commission’s website.

Public safety had previously fought to use a portion of the 700MHz spectrum that went unsold in the Digital Dividend auction.

The 700MHz spectrum in question is considered valuable because it can be used for 4G mobile coverage in regional areas. While a large amount was sold in the recent Digital Dividend auction, 30MHz of it was not sold.

The Labor party under former Communications Minister Stephen Conroy had planned to return all of the unsold 700MHz spectrum to the mobile industry, and instead give public safety agencies 10MHz of spectrum in the 800MHz band. The position is supported by the Australian Mobile Telecommunications Association (AMTA).

However, the Police Federation of Australia — comprising 58,000 members from police unions and associations — has been campaigning to give public safety agencies 20MHz of the unsold spectrum so that first responders can have reliable and interoperable mobile broadband communications in a disaster.