The Upload: Your tech news briefing for Wednesday, April 8 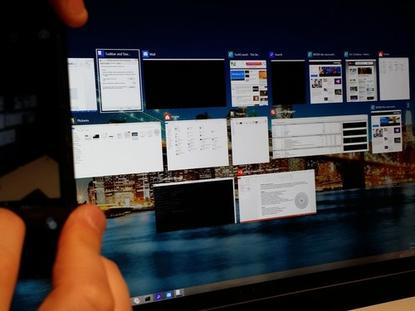 Using Alt-TAB to cycle through windows isn’t that different than Windows 8, but you can see more of what each window holds.

Microsoft will offer a peek at new Office apps next week

A Microsoft event on April 16 promises an advance look at how the next version of Office will work with Windows 10, PC World reports. Demonstrations are expected to include applications that run across all platforms from mobile to desktop, and some new features in Office 2016, optimized for a touch interface.

Intel has shrunk its RealSense 3D camera and is in China pitching it to smartphone makers. In Shenzhen on Wednesday, CEO Brian Krzanich showed off a 6-inch prototype phone built with the new camera, which will be available in devices later this year.

Bulk collection of U.S. citizens' phone records by the U.S. Drug Enforcement Agency started earlier and may have amassed more data than a similarly reviled program carried out by the National Security Agency, a report Tuesday by USA Today suggests. The secret program started in 1992 and collected information on virtually all international calls made by Americans to about 116 countries. Some operators were hesitant to supply the data, but none went to court to contest the blanket subpoenas.

Singaporean communications provider SingTel is paying US$810 million to acquire TrustWave Holdings, the largest U.S. independent provider of managed security services. TrustWave will continue as a separate business unit in Chicago, focused on addressing the managed security services market that Gartner expects will grow to $24 billion in the next three years from $14 billion last year.

Hackers working for the Russian government got access to sensitive parts of White House computer systems, CNN reported. Investigators believe they gained access via compromised systems at the State Department, which has spent months trying to purge its email servers of lurkers. The hackers apparently had access to sensitive information such as real-time, non-public details of the president's schedule.

GreatFire said it won't stop its efforts to circumvent Internet censorship in China despite a recent DDoS attack that threatened to cripple its activities, and that it believes came from the country's government. GreatFire offers Chinese users ways to bypass China's censorship of sites such as Google, the BBC and The New York Times, by offering mirror websites to those blocked destinations.

Maybe a long line of noisy fans standing outside the shop is an out-of-date image for a company that's increasingly positioning itself as technology's luxury brand. Or maybe Apple fears sending too many customers away empty-handed if, as expected, demand for its new Watch outstrips supply. In either case, it's sent a memo to retail employees asking them to steer customers online to order either the new wearable or the latest MacBook.

Drones herding sheep? Take a look at how some farmers are saving on dog food.

If you're tempted by the promises of in-home connected devices, check out this in-depth look at security concerns you should keep in mind.