Sydney to be home to Microsoft flagship store 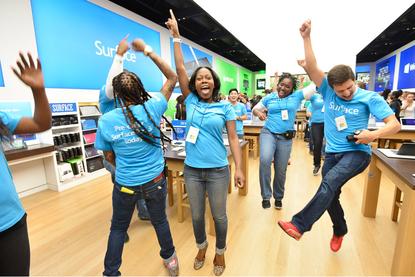 No word on whether the opening of Microsoft's Sydney retail store will feature the kind of antics captured here at the opening last year of the third Microsoft store in Georgia, US.

Microsoft Australia has revealed that Sydney has been selected to house the first Microsoft flagship store outside of North America.

Microsoft Australia managing director Pip Marlow revealed in a blog post that the store will be in the Westfield shopping centre in Sydney's CBD.

The company has not yet revealed the opening date for the store, but says it will be prior to Christmas in "late 2015".

"This is a significant development for our business locally as well as globally and is the latest in a series of Microsoft investments in Australia," Marlow wrote.

The Microsoft Australia MD cited the launch of the Azure Geos in Australia (offering Microsoft's Azure cloud services out of data centres in Sydney and Melbourne) and on-shore hosting of Office 365 and Dynamics CRM Online as two examples.

Microsoft operates 110 stores in the US, Canada and Puerto Rico, Marlow said. In addition there are 17 "store-in-store locations" in China and 189 online stores in other countries."

The new Sydney store "will provide an opportunity to experience the best of Microsoft products like Windows PCs, Surface devices, Windows Phones, Xbox One, Office and more in an innovative and vibrant setting," Marlow wrote.

"In addition, the store will feature our Answer Desk – a one-stop shop for questions, troubleshooting, repairs and support for all Microsoft software and hardware. Altogether, these products and services empower our customers to do more, achieve more."

The store will have more than 6000 square feet of floorspace over two levels, according to Microsoft.

Microsoft opened its first store in Scottsdale, Arizona, in October 2009.