The Apple-1 antique personal computer listed on eBay earlier this month sold for just over $US236,000 last week. 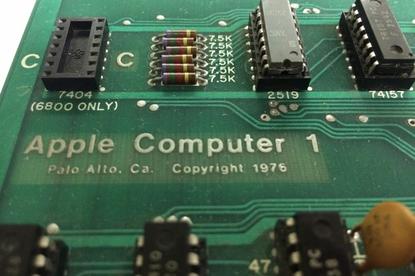 The Apple-1 antique personal computer listed on eBay earlier this month sold for just over $US236,000 last week.

Seller Bob Luther, who late last year sold a different Apple-1 for $US365,000 through the Christie's auction house, pledged 10 per cent of the latest sale to the ALS Association, a non-profit that raises money for research into amyotrophic lateral sclerosis, also called "Lou Gehrig's Disease".

Luther's Apple-1 was in working condition, and included a rare cassette interface, which connected to a cassette tape recorder for storing programs on tape.

Bidding on the 39-year-old computer reached $US100,000 on the auction's final day, and accelerated until it ended less than two hours later, finishing at $US236,100.

While that was significantly lower than the record for an Apple-1 - The Henry Ford paid $US905,000 paid for one in October 2014 - it was a record for the computer on eBay, according to the Apple 1 Registry, a listing maintained by Mike Willegal.

The Apple-1 was the first pre-assembled personal computer - essentially a stand-alone circuit board, it lacked amenities like a power supply, keyboard or display - and the first product from the then-new Apple Computers. In 1976, the Apple-1 sold for $US666.66, or approximately $US2750 in 2015 dollars. About 200 were produced overall, with just over 60 known survivors today.

Designed by Apple co-founder Steve Wozniak, the Apple-1s were hand assembled by Wozniak, Steve Jobs and a few others. The computer sold last week by Luther had been bought by Joey Copson of Palo Alto, Caliornia in 1976 from the Byte Shop, the iconic Mountain View, California, computer store founded the year before. Luther had purchased the Apple-1 from Copson's family in 2012.