The Upload: Your tech news briefing for Wednesday, May 13 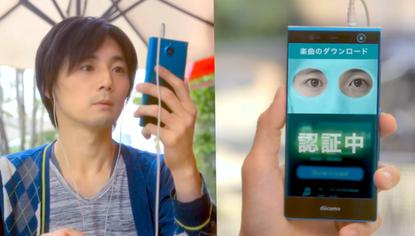 A screenshot from an NTT DoCoMo video shows the iris authentication feature of the new Arrows NX-F04G, announced Wednesday in Japan.

Forget fingerprints: Japanese carrier NTT DoCoMo has just unveiled the first smartphone that looks deep into your eyes to recognize you and let you access your device. The Arrows NX F-04G is made by Fujitsu. Its iris authentication technology can also be used to authorize mobile payments via specifications set by the FIDO (Fast IDentity Online) Alliance, which is backed by Microsoft, Google, PayPal and others.

Russian cybergroup is said to be planning bank attacks

A security firm is warning that a group of Russian hackers known for targeting military, government and media organizations is now preparing to attack banks in the U.S. and elsewhere. The group's preparations, discovered by analysts from security firm Root9B, have included writing new malware, registering domain names similar to those of intended targets, and setting up command-and-control servers. The group's primary malware tool is a backdoor program called Sednit or Sofacy that it delivers to victims through spear-phishing emails or drive-by downloads launched from compromised websites.

Shift to online video is browning out a greener Internet

While Facebook, Apple and Google have all been working hard to lower the environmental impact of their massive data centers by using renewable energy sources, a new report from Greenpeace says that the exploding consumption of online video is countering this positive trend. Cloud services in general and streaming video in particular are driving an increase in electricity consumption at data centers. So walk to a movie theater -- or at least watch Game of Thrones with a friend.

Samsung's Artik boards will be the guts for drones, robots and IoT devices

Samsung is releasing a trio of hardware development boards that will make it easier for startups and tech enthusiasts to build robots, drones, wearables and all manner of other connected gadgets. The Artik boards are part of an effort by Samsung to sell more components and services for the fast-growing Internet of Things.

Intel will beef up its custom server chips by integrating application-specific ICs with future Xeon processors, a move that should speed up cloud, security and big data applications. The integrated ASICs will be reprogrammable, so customers will have the flexibility to adapt their servers to handle specific types of tasks.

Is Verizon's deal for AOL a sign of weakness?

Now that Verizon's offer to buy AOL for $4.4 billion is public, the pundits are out, with some saying it's all about the content pipeline and others saying it's all about the ad-tech. A darker view comes from The Wall Street Journal, which suggests that the deal is a sign of Verizon's weakness, as physical communications networks confer less of a competitive advantage in a converged world.

After a decade of research, IBM has developed a new silicon photonics chip that can transfer data at aggregate speeds of 100Gbps. Light can transfer data faster than copper cables, which are used in data centers to link storage, networking and servers. The silicon photonics chip could lead to high-bandwidth optical fiber connections in future generations of supercomputers and servers.

Intel's Gordon Moore talks about his famous observation that paved the way for faster, smaller and cheaper computing devices.

Who are those 2.1 million people still paying AOL for dial-up Internet access? Re/code has some ideas.